A World Without Strangers 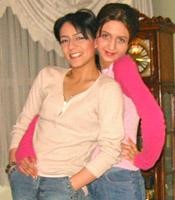 This engaging and innovative documentary explores the common misperceptions and stereotypes of one another shared by young people in the Middle East and the United States. Images of subjugated Middle Eastern women and violent men permeate the American media and similarly, images of superficial and promiscuous American women pervade the worldwide media.

A World Without Strangers connects five college-age women from the United States with five from the Middle East in a media-based dialogue that illuminates and challenges cross-cultural misconceptions. The American women — Lauren, Lindsay, Eboni, Thanh, and Danielle — are from diverse backgrounds. Three of the Middle-Eastern women — Zohreh, Mahdieh, and Asal — are Iranian, while Rima and Hala live in Dubai, in the United Arab Emirates.

These photos are then edited into video diaries, which the participants view in a second round of interviews. By sharing their lives and stories, the women begin the process of rejecting their stereotypes and recognizing their commonalities. As Lauren, one of the American women, exclaims at the end of the program, “They’re just like us!”

A World Without Strangers powerfully illustrates Quaker activist Gene Knudsen-Hoffman’s incisive comment, “An enemy is someone whose story we don’t know.” The video speaks directly to young people and it will challenge students to think about media images of the Middle East and how those images shape their own perceptions. It will generate discussion in a variety of courses in communication, media studies, multiculturalism, women’s studies, Middle Eastern studies, and international relations. It was produced by Kelly Briley and Hamid Khani for Olive Tree Communications.

Note: The DVD version of the video was fully authored by the producers and includes as an Extra Feature the complete program script.

A companion website, www.learnfromstories.com, seeks to link users in a cross-cultural dialogue, in which they can share their own stories.