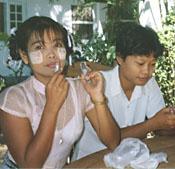 Every few years a new documentary comes along whose impact is so powerful, so illuminating, and so memorable that it is deemed an instant classic and an essential classroom teaching tool. “Anonymously Yours” is such a film. This extraordinary documentary on sex-trafficking in Southeast Asia interweaves four young women’s stories to reveal an institution that enslaves as many as 40 million women worldwide.

Shot clandestinely in Myanmar (formerly Burma), “Anonymously Yours” is often shocking, frequently harrowing, and always compelling. Through the brutal honesty of the four women’s stories the film exposes the commonplace bartering and selling of women and the cycles of poverty that enslave them.

From the back rooms of teashops and restaurants to the lounges of five-star hotels, the Far East sex trade thrives on the routine merchandising of girls and women for the sexual escape and pleasure of men from all cultures. Through their unforgettable and poignant testimonies, these four sex workers introduce Western audiences to the widespread corruption and staggering poverty that are the status quo in much of the world — and the primary causes behind one of the fastest-growing and most vicious industries on earth: the sale of human beings.

“Anonymously Yours” will engage and challenge students and provoke animated discussion in a wide range of courses in women’s studies, cultural anthropology, Asian studies, human rights, economics, and development issues. It was produced by Gayle Ferraro, who also produced the widely acclaimed documentary, “Sixteen Decisions.”

“This powerful film will be an eye-opener for most students in the United States. Many of us have heard of sex-trafficking before, but hardly anyone has ever met a person who has been trafficked. This film introduces us to ZuZu and other women sharing her destiny. ZuZu was trafficked from Burma to China. She shares her story with us. It is an amazing, cruel, and shocking story. It is also a story of demand and supply: Men paying for the services of women who have to sell their bodies because of economic despair or because they have been sold by one of their family members to a ´new owner.´ This film touches the viewer emotionally but it also challenges us intellectually. Students interested in human rights and development will be strongly motivated to better understand the economic, social, legal, and political structures turning people into objects.” — Iris Bohnet, Assoc. Prof. of Public Policy, Kennedy School of Government, Harvard University

“A unique documentary that captures both the horror and the complexity of sex trafficking in Southeast Asia today. Through interviews with survivors, viewers learn about the factors that make the children vulnerable, the trafficking methods, the psychological and physical harm to the victims, and the pervasive corruption that allows sex trafficking to thrive. This is a sophisticated educational film that will complement any curriculum on violence against women and trafficking into the sex industry.” — Prof. Mei-Mei A. Ellerman, Women´s Studies Research Center, Brandeis University

“A compelling and tragic portrait of women who have been victimized and their lives wasted in a web of sexual exploitation. The squalor in which these young women live contrasts powerfully against the gold-leafed opulence of the temples and tourist haunts that form the backdrop of the film. This eye-opening film should generate rich and absorbing discussion in classes that deal with human rights, women´s issues, international tourism, and global economics and development, to name just a few.” — Myrna Balk, Simmons College School of Social Work

“A thought-provoking documentary that lends itself as an educational and mobilizational tool. The film raises awareness about the entrenched problem of the sex trade in Southeast Asia, and the complex set of political, economic and social factors that lie behind this harsh reality. While delving into the daily reality and minds of the women who are sold, the film shows us the human face, the personal stories as well as the challenges involved with rehabilitation. The film creates an engaging springboard for classroom discussion and political action that urgently needs to be translated into sustainable solutions, not just by local governments in Southeast Asia, but in partnership with the international community as a whole.” — Shyama Venkateswar, Assoc. Director, Asian Social Issues Program, Asia Society, New York

For more information about the film or about its producer, Gayle Ferraro, please visit www.aerial-productions.com.