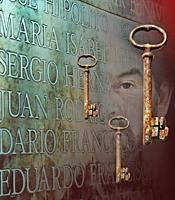 This beautifully crafted, poignant, and timely documentary explores the power of art to heal the trauma of torture. The film follows exiled Chilean musician Quique Cruz from the San Francisco Bay Area to Chile and back as he creates a multimedia installation and musical suite in an effort to heal the emotional wounds inflicted on him by the state-sponsored torture of the Pinochet regime.

Utilizing an innovative and compelling blend of documentary, performance, and interview sequences, Archeology of Memory accompanies Cruz as he visits former concentration camp sites and ruins and talks to his mother for the first time in 30 years about his Disappearance and incarceration. To give added depth to his story, he seeks out and receives testimony from other artists who were tortured in Chile. In these intimate conversations writer Nubia Becker, poet Anita Moreira, and painter Guillermo Nuñez relate their cruel experiences as political prisoners and show how their art has helped each to transcend their trauma.

The film’s musical score is an intricate element of its emotional resonance with viewers. The narrative follows the development of Cruz’s musical suite as he remembers his Disappearance, torture, and exile. His memories span the years from Salvador Allende’s Chile through the dark era following the U.S.-backed coup led by General Augusto Pinochet and right up to the present. The story climaxes at the infamous former Villa Grimaldi torture site in 2006, with the dedication by current Chilean President Michelle Bachelet of a theater where Cruz performs his suite for an audience of thousands at the place where he was once incarcerated and tortured.

This unforgettably powerful and engaging film opens a vital window of understanding on the repercussions of state-sponsored torture and disappearance of political prisoners. Many victims of torture want only to forget the past in order to live in the present. Because of this need to forget, their stories are often never disclosed, and the process of healing for them, their families, and their communities may be delayed for decades or even generations.

Archeology of Memory: Villa Grimaldi will help bring transparency to this timely topic and provide a riveting context for thought, analysis, and discussion in a wide variety of courses in Latin and South American studies, human rights, Third-World studies, cultural anthropology, and the arts and music. The film is a co-production of Interfaze Educational Productions and the Independent Television Services (ITVS), in association with Latino Public Broadcasting (LPB), with funding provided by the Corporation for Public Broadcasting (CPB). It is a film by Quique Cruz and Marilyn Mulford. It is in English and Spanish with English subtitles and English closed-captions. The DVD was fully authored by the producers.

“A moving account of an artist who survived Villa Grimaldi, the worst torture center of Pinochet´s dictatorship in Chile. The mood is nostalgic, without a trace of self-pity, and leaves a memorable impression in the heart of the viewer.” – Isabel Allende

“Impressive and powerful. The film successfully fuses the emotional and informational aspects of its narrative in a way rarely seen in historical documentaries. Highly recommended!” – Mario Barrera, Prof. of Ethnic Studies, University of California, Berkeley

“Poignant and moving. The film documents in completely human terms the pain and suffering caused by the Pinochet regime´s torture centers not only to Cruz or his family or friends, but also to Chile as a nation. This is an excellent film for exposing a new generation of students to the brutality of Cold War politics in Latin America. I highly recommend it for college courses in Latin American Studies and History, Human Rights, Political Science, and Third-World Studies.” – Prof. Hector Perla, Jr., Latin American and Latino Studies Dept., University of California, Santa Cruz