Backbone of the World 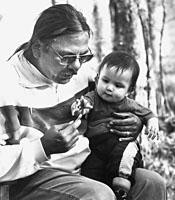 Set amid the majestic splendor of the northern Rockies, this innovative and inspiring documentary interweaves two compelling parallel stories: film director George Burdeau’s journey home to live and work on the Blackfeet Reservation, and his tribe’s determined struggle to protect its sacred lands and forge a new identity.

Literally backed up against a wall, the Blackfeet Reservation lies in the great shadow of the northern Rocky Mountains — known to the tribe as “the backbone of the world.” An area called Badger Two Medicine, a 130,000-acre tract of treaty land, was recently opened for oil drilling by the U.S. Forest Service. An important spiritual retreat for the Blackfeet people, the Badger Two Medicine lands are now threatened by water contamination and the inevitable destruction of plants used for medicinal and spiritual purposes.

Producer Pamela Roberts and director George Burdeau developed a four-year working relationship with the Blackfeet community, collaborating with tribal elders, government officials, and local Blackfeet videographers. Continuing the tradition of elders before him, veteran filmmaker Burdeau took on the role of mentor by teaching his craft to three young Blackfeet filmmakers, enabling them to pass on tribal stories with a fresh perspective.

Under Burdeau’s guidance, the young filmmakers give new voice to the Blackfeet saga by intertwining the ancient tribal account of “Scarface” — whose healing journey gave the Blackfeet their religious traditions — with the contemporary crisis facing the community over the Badger Two Medicine despoliation.

“Backbone of the World” illustrates that today the Blackfeet live in two worlds, modern America and the Blackfeet Nation. At risk is the language, religion, art, and remaining land belonging to a Native tribe that survived a smallpox epidemic in the late 19th century, and is now besieged by the encroachment of the dominant American culture. The inevitable disenfranchisement of Blackfeet youth is apparent. As one elder recounts, “Youngsters don’t know the wilderness, just downtown.”

“Backbone of the World” is a unique and engaging film that explores the Blackfeet perspective on their culture, environment, and quest for tribal survival in the 21st century. The film will engender reflection and discussion in a wide range of courses in Native American studies, American history and studies, cultural anthropology, comparative religion, and the environment. It was produced by Pamela Roberts and directed by George Burdeau, and is a Rattlesnake Productions Film.

"Exceedingly well suited for courses in Native American studies, cultural anthropology, sociology, and American history. I plan to incorporate the film into my own courses." — Paul Apodaca, Prof. of American Studies, Chapman Univ.

"Depicts the pristine heritage of the Blackfeet seen through the eyes of an eagle. The film flows through the expanse of time, gathering remnants of the Blackfeet legacy as it travels, expounding a powerful message to the society at large." — Terry Whitright, Principal, Heart Butte School District, Blackfeet Reservation