Between Two Worlds: A Japanese Pilgrimage 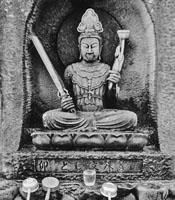 For centuries, pilgrims have come to the Japanese island of Shikoku to trace the 1,000-mile route known as the “Pilgrimage to the 88 Sacred Places of Shikoku,” a journey believed to have been first undertaken by Kobo Daishi, founder of Buddhism’s Shingon sect in the ninth century.

This illuminating documentary is a visual meditation on the phenomenon of pilgrimage and, to a lesser extent, on the processes of ethnographic filmmaking. It combines images of traditional and modern Japan, excerpts from the writings of Kobo Daishi, and commentary by pilgrims, everyday Japanese, and the filmmakers themselves to explore the meaning and persistence of “pilgrimage” in contemporary industrial Japan.

By examining the effects that rapid change has had on this ritual journey, the film asks: Why do people still undertake pilgrimages to “sacred” places? This thought-provoking documentary will generate discussion in courses in Asian studies, Japanese studies, cultural anthropology, Buddhism, and comparative religion. It was produced by Joanne Hershfield and Susan Caperna Lloyd.

"We are fortunate to have this video. It skillfully juxtaposes old and new images of the pilgrimage event and provides easy access to a complex topic." — John Nelson, Prof. of Religion and Asian Studies, Univ. of San Francisco

"A high-quality film that is very useful as a study tool for learning about Japanese culture." — Robert J. Marra, Executive Director, National Assn. of Japan-America Societies