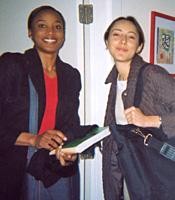 This engaging documentary explores a wide array of issues faced by international and American students when developing working relationships and friendships with one another. It serves as an excellent discussion-starter on interchanges between students of varying nationalities and ethnicities, as well as a thought-provoking illustration of how intercultural contacts help break down cultural stereotypes and ethnocentrism.

The film introduces seven young women from six different countries and regions around the world. The seven are graduate students at a university in California, and are living together in a shared home for the academic year. They share personal insights and engage in unscripted and unrehearsed discussion about their differences and similarities. At a time when international tensions are high, these young women discuss how they were able to develop meaningful friendships with Americans and with one another. Their perceptions are valuable for individuals from outside this country who are studying here as well as for their fellow American students.

The seven women include two Americans, one of Eastern European background and one Vietnamese-American, and one each from India, Iran, Spain, Nigeria, and the Philippines. The film is organized into six sections, each accessible from the DVD menu. They are: First Impressions, Commonalities, Stereotypes, Isolation, An Open Mind, and Lessons Learned.

With its lively style and thoughtful commentary, Beyond Our Boundaries will capture students’ interest and generate thought and discussion. It will also promote cross-cultural interaction, diversity, and sensitivity to other communities and cultures. It will make an important contribution to a variety of classes in psychology, communication, sociology, cultural studies, and education, as well as to programs in multicultural centers, international houses, dorms, and study abroad programs. It was produced by Jessica Keith, one of the seven women featured in the film. The DVD was fully authored by the producer.

"An excellent resource for individuals, groups, and institutions working to engender unity and collaboration among students through increased awareness of differences and similarities. This documentary seeks to address the physical, emotional, and often superficial gap that exists between students from different parts of the world by encouraging authentic dialogue and the sharing of life stories. What we see is a testament to the fact that a true sense of multiculturalism, based on authentic understandings of the Other, is attainable through shared spaces where individuals from different backgrounds can engage in safe dialogue. What appears to be a forum of seven women sharing stories is actually a very powerful example of how participatory methods can be employed in promoting cross-cultural interchange and a true sense of multiculturalism." — Shabnam Koirala-Azad, Asst. Prof. of International and Multicultural Education, Univ. of San Francisco

"This delightful documentary powerfully presents the riches and rewards of learning and experiencing other cultures. Every student interested in or already committed to studying abroad should view this documentary. It should also be required viewing for anyone who works with international students. The documented insights, warmth, and openness are up-to-date reminders of multiculturalism at its best. In my four decades of intercultural training, this would have been a most-prized possession in my trainer´s tool kit!" — Sandra Fowler, Former President, SIETAR, Intl. (International Society for Intercultural Education, Training, and Research)

"This video graphically demonstrates the complex nature of developing relationships between individuals, in this case young women, from different cultures. Intercultural relations evolve when there is respect and forgiveness present and a commitment to working through the challenges that are bound to emerge as people work, study, and live together. It is not about smooth sailing. It shows various ways in which the young women are impacted by encounters with their different values and behaviors and come to develop lasting relationships." – Margaret Pusch, Assoc. Director, Intercultural Communication Institute