Beyond the Politics of Life and Choice: A New Conversation About Abortion 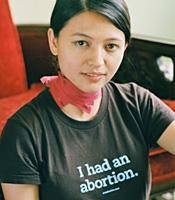 Probably no issue in contemporary America is more divisive and emotionally charged than the debate over abortion rights. And classroom discussions of this polarizing topic can be very difficult, since the moral stakes and the positions of those on both sides of the issue are frequently deeply entrenched. Often most of a class will hold one view and those with the minority position will find it hard to speak out.

Put simply, Beyond the Politics of Life and Choice is the best classroom tool available for moving the debate over abortion away from politicized battle lines and into a compassionate and sensitive space, where people with opposing views can better understand the deep concerns of one another.

As Prof. Katherine McLaughlin of Keene State College writes, “What is so helpful about this exceptionally thought-provoking film is that it articulately presents both sides of the abortion debate, giving weight to the arguments of both the majority and the minority in my class, while modeling respectful dialogue and disagreement between those on both sides of the issue. In my class on Women´s Sexual Rights, the film enabled active participation in the discussion from those with very different points of view, and resulted in some students seeing glimmers of truth in the arguments of those opposing their positions and most students getting a deeper grasp of the complexities of the issue.”

The film weaves together thoughtful and eloquent commentary by activists, legal experts, theologians, seminarians, college students, service providers, and women for whom the decision to terminate or not to terminate a pregnancy has been a formative event in their lives. All bring admirable nuance and insight to a subject often avoided and fraught with prejudice, stereotypes, tension, and fear.

The film explores a wide array of overlapping issues and questions at the heart of the abortion debate:

* When does new life begin and when does a fetus become a person? Does the potential for personhood make a fetus a person immediately? What does openness to creation really mean in practice?

* Should reverence for life include reverence for the complexity of life? Is “innocent life” not threatened by poverty, domestic abuse, social violence, and war as well as by abortion? Do our theories of right and wrong address reality?

* Is sex for procreation only? What about intimacy and commitment? What about sex education?

* Will criminalizing abortion make it go away? Does abortion liberate women, or does it burden them with grief and shame? What are the rights and responsibilities of men with regard to unintended pregnancies?

The film concludes with a poignant conversation between Angie and Barbara, two longtime friends whose simultaneous pregnancies highlighted their opposing views on abortion.

The DVD also contains Special Features that delve deeper into related issues that could not be covered adequately in the film itself, including such topics as adoption, religion and abortion, reproductive justice and women of color, the possibility of finding common ground, and a conversation with Dan and Sidney Callahan, a loving married couple whose opposing views on abortion demonstrate the disparity and complexity of opinion on this subject. Such conversations remind us of our capacity to love and respect those who disagree with us.

Beyond the Politics of Life and Choice will inspire compassionate listening and open-hearted discussion in a variety of courses in women’s and gender studies, psychology, sociology, ethics, political science, public health, social justice, communication, conflict resolution, and contemporary social problems. The film was produced by John Ankele and Anne Macksoud for Old Dog Documentaries.

"This film is the perfect ticket to lively, open classroom discussion of Pro-Life and Pro-Choice issues. Because so many perspectives are given concise, passionate, eloquent expression, students will be stimulated to think and speak their minds. Combined with the DVD´s excellent Special Features, the film provides a basis for several hours of rewarding discussion and a launch pad for many thoughtful essays." — Virginia Ramey Mollenkott, Prof. Emeritus of Women´s Studies and English, William Paterson University of New Jersey

"Engaging, thought-provoking, and moving, this well-balanced film encourages those on both sides of the abortion debate to listen to each other with respect and compassion. An invaluable tool for stimulating discussion in women´s studies, sociology, and ethics courses, the film´s wide-ranging interviews and conversations expand our understanding of the complex issues surrounding abortion." — Prof. Elizabeth C. Fine, Director, Humanities Program, Dept. of Interdisciplinary Studies, Virginia Tech

"Without overblown rhetoric, without bombastic posturing, this impressive video captures the complex issues surrounding abortion. The many people interviewed reflect a wide range of ideas and life experiences. The quiet conversation among these people provides ample room for necessary dialogue. I couldn´t help but rethink my own, lifelong views on abortion after listening to all these people. Students and faculty will benefit from this reasoned and compelling exploration of abortion. Watching the film gave me hope that there might just be a way to have an intelligent and critical discussion on this vital issue." — Anne-Marie Drew, Prof. of English, US Naval Academy

"A very powerful and well-balanced presentation on one of the great societal issues of our time. I must admit I did not always agree with some points of view, but that is to be expected given the nature of the subject. Students on college campuses will find the video very engaging, no matter what their personal beliefs. It is clear that the film has tried to present the subject in a way that is meant to encourage people to reflect on the issue in a non-polarizing way. I believe most students will appreciate that orientation." — Gerry Silverstein, Prof. of Biology, University of Vermont

"More than just another emotionally heated volley of arguments over a woman´s right to terminate an unwanted pregnancy, this documentary… opens the door for continuing discussion on sex education, unwanted pregnancy, and abortion. Recommended." — Dr. Carol Holzberg, in Booklist (American Library Assn.)

An excellent discussion guide for the film may be found at the producers´ web site, at www.olddogdocumentaries.org