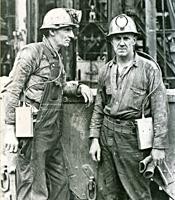 This “beautifully told and eye-opening account of the legacy of industrial mining in the American West” recounts the sometimes glorious, often sorrowful, but always fascinating story of Butte, Montana, once the world’s largest producer of copper — the “Richest Hill on Earth,” the town that “plumbed and electrified America,” the Pittsburgh of the West. In Butte the Industrial Revolution collided with the romance of the frontier, corporate capitalism battled organized labor, and human appetite laid waste to land and water, yielding fortunes for a few and a tragic environmental legacy for the people left behind.

Those people — the ones left behind to deal with mining’s toxic legacy — are at the heart of the film: miners, their families, the multiethnic working class neighborhoods they created amidst danger and hardship. In a copper crucible, they forged a community whose toughness, vitality, and solidarity speak to what’s missing in America today.

Butte, America tells both an historical and an intensely contemporary story. As more and more countries around the world pursue an urban-industrial lifestyle, the story of Butte becomes a story for the world.

By locating Butte’s story in a global, 21st-century context, Butte, America will thoroughly engage students and stimulate reflection and discussion in a wide range of courses in sociology and social psychology, American history and American studies, development issues, environmental studies, and women’s and gender studies. It was produced and directed by Pamela Roberts for Rattlesnake Productions.

The DVD includes two extra features in addition to the 67-minute documentary: A poignant ten-minute segment titled “A Memorial: Remembering Our Friends,” and an insightful five-minute “behind the scenes” segment on the filming of the documentary. The DVD is closed-captioned.

"A beautifully told and eye-opening account of the legacy of industrial mining in the American West. The film´s compelling first-person narratives engage students in a discussion of both the powerful bonds of community and the disrupting forces of industrial capitalism." — Mary Murphy, Professor of History, Montana State University

"Offers a compelling account of the harsh realities of hard-rock mining and the hardy resilience of immigrants who made the Mining City their home. Featuring interviews with long-time residents, the film tells an intimate story of determination, hope, and loss as underground and open-pit copper mining played out in Butte, leaving a toxic legacy. The film makes a unique contribution by locating Butte´s story in a global context and by offering an account that extends beyond the glory days of Butte´s boom to the social and environmental challenges facing the community in the 21st century. It is an excellent resource for college courses in western history, labor history, women´s studies, environmental studies, and international development studies." — Janet L. Finn, Professor of Social Work and Faculty Member in Women´s and Gender Studies and International Development Studies, University of Montana-Missoula

"A compelling documentary about the history of one of the most important mining centers in the United States. With stunning visuals, clear explanations of complex subject matter, and most of the narration directly from the voices of Butte miners and residents who knew the history first-hand, the film is an effective teaching tool. The film´s main strength is its description of the social and environmental impacts of industrial mining, shown through both the local passions of Butte people and the macro context of globalization." — Frederic L. Quivak, Associate Professor of History, Michigan Technological University, and Editor, IA: The Journal of the Society for Industrial Archeology

"This outstanding documentary captures not just the history, but also the spirit of one of the most important industrial centers found anywhere in the American West: Butte, Montana. Students of Western history, urban studies, ethnic history, and labor history would all benefit tremendously from a close examination of this remarkable film." — Robert R. Swartout, Professor of History, Carroll College, Helena, Montana

"Butte, America captures the gravity and history of the most interesting city in the American West. A memorable film about an unforgettable place." — Tom McGuane, author of Nothing but Blue Skies and Gallatin Canyon

"Butte, America is fascinating, mythic, poetic, and ultimately almost overpowering in its utterly relevant presentation of the role of Butte in Montana, United States, and world history. This is an amazing story of community, beauty, and human dignity in the midst of almost ceaseless injustice, and is told with incredible skill." — Rick Bass, author of Winter: Notes from Montana and Why I Came West

"Butte, America tells a vivid story of more than a century of industrial exploitation in the heartland of America. It´s about civilization coming into the Western wilderness, no cowboys or Indians but rather mining camp laborers from Cornwall and Ireland and Finland and America who went deeply and courageously under the earth and occasionally lost their lives in order to ensure that corporations and their owners could be wealthy and powerful beyond sensible measure. A combination of historical documentary film interwoven with interviews of living old timers, this film powerfully condemns the cold-hearted methods used to exploit essentially disenfranchised working people in Butte, methods still common in mines around the world. What to say? Glory in the proud survivors, fight against the injustices." — William Kittredge, author of Who Owns the West?