Cashing in on Culture: Indigenous Communities and Tourism 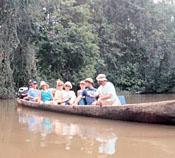 Tourism is one of the largest industries in the world, and one of the most important forms of contemporary contact between different cultures. Eco-tourism and “ethnic” tourism, designed specifically to bring affluent and adventurous tourists into remote indigenous communities, are among the fastest-growing types of tourism worldwide.

This insightful documentary, filmed in the small tropical forest community of Capirona, in Ecuador, serves as an incisive case study of the many issues and potential problems surrounding eco- and ethnic tourism. Those issues are shown to be simultaneously cultural, economic, and environmental, and are complexly intertwined for both indigenous communities and tourists.

The film interweaves illuminating sequences featuring the Quechua-speaking Capirona Indians, Ecuadorian tour operators, anthropologists and other academics, and college-age American tourists to examine the benefits and negative costs of such tourism to everyone involved. The film focuses in particular on how tourism has changed the lives of members of the indigenous community, which took eight years to decide to admit tourists into their villages.

The cash flow from tourism that is managed directly by the Indians bypasses the fees normally exacted by travel agencies and tour operators and may be able to sustain the community if revenues are distributed equitably. But how do indigenous communities, in the context of global tourism and business interests, set up and run successful tourist operations without compromising their own cultural traditions and despoiling their environment?

“Cashing in on Culture” explores some of the most perplexing issues facing indigenous communities and raises a multitude of thorny questions. The film will generate discussion in a variety of courses in cultural anthropology, development and Third-World issues, and Latin American studies. It was produced by Prof. Regina Harrison, University of Maryland, who also produced the award-winning “Mined to Death.”

"This frank and lucid video is really good. It is sure to generate rich, complex class discussion. Without denying the possibility of a socially responsible tourism, the video bravely and candidly presents the challenges involved. Viewers are required to move beyond both idealistic and cynically resigned positions, and to see themselves in the eyes of others." — Mary Louise Pratt, Prof. of Latin American Studies, New York Univ.

"This film is perfect for teaching about the complexities and contradictions of globalization as experienced on the ground by indigenous people who are themselves cultural and political actors on a local and global stage. It will engage students profoundly in complicated questions which the film persuades you to care about deeply." — Brett Williams, Prof. of Anthropology, American Univ.

"This heartfelt essay on eco-tourism should elicit lively and informed discussion on the ethics, economics, and cultural issues involved, especially for the indigenous peoples." — Pat Aufderheide, Prof. and Director, Center for Social Media, American Univ.