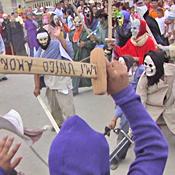 This “superb, thought-provoking” ethnographic documentary explores the vitality and controversies surrounding a remarkable syncretic religious ceremony held in neighboring remote villages in rural Honduras during the Easter Holy Week. The ritual drama enacted in this ceremony resonates with persistent indigenous beliefs although expressed within a familiar Catholic framework.

During the week leading up to Semana Santa, the two villages are literally overrun by characters called “Judios” (Spanish for “Jews”), masked individuals who carry wooden swords, speak in a strange guttural manner, and generally cause mayhem by staging riotous mock sword fights. Not surprisingly, members of the local Catholic Church – most notably the parish priest – consider these indigenous celebrations to be sacrilegious and want them ended.

Tensions between Church members and the celebration participants are high, and the conflict is further exacerbated because the opposing sides are not comfortable speaking directly to one another about the issues involved. However, by including the divergent perspectives of members of the various constituencies, one of the principal goals of the film itself is to facilitate a channel of communication between the opposing parties that will enable dialogue to take place between them.

With that goal in mind, the filmmaker returned to Honduras to screen a preliminary version of the film in order to make this invaluable cultural heritage available to the very community to which it belongs. Community members with opposing views were asked for their reactions, which were then incorporated into a final version of Celebrating Semana Santa, thereby adding a unique reflexive component to the film.

Celebrating Semana Santa powerfully illustrates how symbols from the past may be re-interpreted in modern contexts and not simply survive but thrive in those radically changed situations. In so doing the film illuminates the varied ways that people craft their understanding of the present with reference to the past and their hopes for the future.

The film will engage students and inspire thought and discussion in a wide variety of courses in Latin American studies, cultural anthropology and ethnography, and religious studies. It was produced and directed by Sam Pack, Associate Professor of Cultural Anthropology at Kenyon College. It is in Spanish with English subtitles.

"By focusing on multiple, conflicting opinions about a single ritual, this superb, thought-provoking film makes good on documentary anthropology´s promise to explore complexity, social change, and native voices. A fascinating final segment, in which the filmmaker solicits interviewee´s responses to a penultimate copy of the film, also provides a good model of participatory filmmaking. I highly recommend this film for anyone interested in Latin American studies, ritual, anthropology, or documentary film in general." — Peter Wogan, Associate Professor of Anthropology, Willamette University

"As a resource for those in Latin American Studies and Social Sciences, this well-edited ethnographic documentary looks from within the native perspective at a traditional folk religion performance, which in its contemporary manifestation has led to a mounting conflict in two small towns in rural Honduras. By screening the film from the initial fieldwork to the communities involved, Sam Pack eloquently illustrates the responsibility that social scientists have in sharing their work with their informants. This documentary will be useful in the classroom because its sequences skillfully illustrate and facilitate teaching notions of cultural tradition and change." — Milton Ricardo Machuca, Assistant Professor of Spanish, Pitzer College

"A fascinating and insightful exploration of religious syncretism in the Honduran countryside. The historical tensions between organized religions, in this case the Catholic Church, and indigenous religions and cultural practices continue to confront each other in the present day, with new generations and new interpretations and historical understandings. This film is rich material for classroom discussion on a variety of topics, and would be a great addition to any course that deals with religious syncretism and religious Diasporas in Central America and Latin America." — Suyapa Portillo, Assistant Professor of History, Pitzer College