Circle of Stories: Native American Stories from the Four Directions 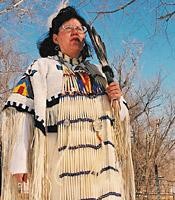 This unique and engaging documentary explores the extraordinary diversity and profound contemporary relevance of Native American storytelling. A feast for the eyes, ears, and mind, the film presents eight varied stories from the four directions and seasons. The collection includes “How and Why” stories, teachings from Spirit mentors, lessons in traditional ways, and instructions for environmental preservation.

Circle of Stories is hosted by American Indian Studies professor and renowned advocate of cultural conservancy Melissa Nelson, Ph.D. (Turtle Mountain Chippewa), who introduces the stories and places each in the larger context of Native cultural and spiritual traditions. Loosely based on the award-winning PBS multimedia web site, the film presents many stories not available there and provides a rich and emotionally compelling viewer experience not possible on other media.

Each segment in this collection of stories has a different style, depending on its content and original storytelling format. Some are filmed and edited in a lively documentary style and some are vibrant dramatic performances. The storytellers also relate why they tell stories, how they learned them, and the importance of the stories to themselves and their audiences.

Among the stories is, from the North, Rosella Goodwill Archdale’s tale “The Cooking Spirit,” a lesson in preparing traditional foods with reverence. In a documentary verite segment, Rosella presents the exquisite fruits of her year-round labor — dried mint, squash, corn, beans and venison. While describing traditional methods of food production, storage, and preparation, she demonstrates how a simple meal is deeply imbued with a connection to spirit. She also talks about the role traditional food can play in the health and vitality of her people. In another short segment, Rosella also shows her skill with beadwork and talks about the symbolism and social importance of beading.

From the East, Tchin tells an amusing and lighthearted story called “The Rainbow,” the tale of how the earth’s colorful flowers came to be. The story is a lively performance, complete with props and vivid storytelling drama. In an interview, Tchin talks incisively about cultural identity, growing up with segregation, and finding his own voice. He also tells an amusing and cautionary “Animal How” story, explaining how Rabbit got long ears and a short tail.

From the South, Hoskie Benally, Jr., a Dineh (Navajo) healer, imparts a story of spiritual wisdom called “The Five Sacred Medicines.” It tells of the origins of the five sacred medicines — cedar, sage, tobacco, yucca, and the eagle. Hoskie comes from a long line of traditional healers, but did not find his own calling until he went blind and subsequently became an alcoholic. Now recovered for many years, he is committed to helping drug- and alcohol-dependent Native youth from all areas of the country. He believes that a strong sense of identity and a cultural foundation is vital for true healing. He also tells a sacred story titled “The Four Waters.” His stories are illustrated with evocative visuals and sound effects.

From the West come poignant stories from Corbin Harney, a renowned Western Shoshone traditional healer and noted anti-nuclear activist. Filmed before his passing, Corbin offers songs to heal and connect with Mother Earth, and sings a Song for the Water in a dawn ceremony near Death Valley, California. He speaks about ceremonies for all living things and teaches that all people, Native and non-Native alike, need to love and celebrate nature. He also tells a riveting true story about meeting a bear in the woods and what he learned from that encounter.

In addition to the eight stories in the main 50-minute film, the DVD contains 35 minutes of extras, including at least one additional story from each of the storytellers.

Circle of Stories is a memorable cultural portrait that will engage and hold the attention of today’s multimedia-age students. It will inspire reflection and generate discussion in a wide variety of classes in Native American studies, cultural anthropology, sociology, religious studies, communication, American studies, and environmental studies. It is a Philomath Films Production in association with The Cultural Conservancy, and was produced and directed by Jilann Spitzmiller and Hank Rogerson, the award-winning producers of Homeland. The DVD is fully authored by the producers.

"A rich and empowering collection of Native American stories that demonstrates the relevance of Native cultural traditions today. An invaluable resource for educators and students in a variety of disciplines. Further, the collection represents Melissa Nelson´s deep scholarly commitment to matters of Native self-determination, reflected here and in her long-time activism in cultural conservancy." — Joanne Barker, Chair and Assoc. Prof. of American Indian Studies, San Francisco State University

"A rare gem of a film that offers up a wide array of invaluable and unforgettable Native American stories! The stories are vibrant, engaging, and informative and are accessible to students of all ethnic backgrounds and all levels. I recommend this excellent DVD to teachers and faculty far and wide." — Bethany B.A. Muller, Prof. of Education, Santa Fe Community College