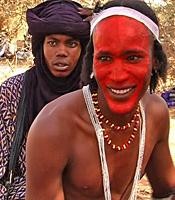 This widely acclaimed and visually stunning ethnographic documentary explores, from the point of view of its participants, the complex cultural significance of one of Africa’s most spectacular but frequently misunderstood and sensationalized ritual celebrations.

In the heart of the Nigerien Sahel (Azawak region), far from any urban center, thousands of Fulbe Wodaabe nomads come together every year to celebrate their cultural identity in a vast ceremonial gathering named the Daddo. For seven days and seven nights, opposing ancestral lineages take part in a complex ritual courtship competition called the Geerewol.

Under the strict control of their elders, elaborately ornamented young men made up with traditional face paint form lines to dance and sing. At the end of each dance, the young women of the opposing lineage come forward to designate the “most beautiful” male of the group. The ceremony is a ritualization of conflict, which probably replaces ancestral feuds and wars over women from opposing clans, and enables the Wodaabe to break the ceremony in peace after mutually recognizing their cultural uniformity.

Each year, organizing the massive gathering becomes more and more difficult, due to the ongoing Sahel ecological crisis and droughts. But according to the Wodaabes, this traditional ceremony is the only opportunity for the nomadic lineages to gather and forge links despite their geographic dispersion. If the ceremony were to be stopped, it would signal to them the end of their society as a unique cultural entity.

Fearing that the tradition may die out, Ouba Hassane, 40, and his wife Kedi, 39, chose to appear on screen and relate their experiences and understanding of the ritual. The film follows as Ouba teaches his son about Wodaabe traditions, myths, and religious beliefs. The couple’s commentary, along with that of the ceremony participants (dancers, young women, those in charge of the youth, societal elders) provide viewers with deep insight into the full occasion, extending beyond the dance.

The Geerewol ritual has been the subject of several films and “studies” in the West since the 1950s. These have largely fueled a fantasy image of a ceremony in which “effeminate” men allow women the privilege of choosing male lovers for a night during a male beauty contest. Filmmaker and ethnomusicologist Sandrine Loncke, who spent ten years among the Wodaabe researching and filming, offers a compelling and powerful reframing of the events. She enables the Wodaabe themselves to decipher for us the subtext of the ritual, examining the full spectrum of gender, social, political, educational, and religious beliefs that underscore Wodaabe cultural identity and help ensure their survival.

Keenly observed, beautifully filmed, and engagingly edited, the film will richly reward viewing and inspire discussion in a wide range of courses in cultural anthropology, African studies, gender studies, and ethnomusicology. The film is subtitled in English. It was produced and directed by Prof. Sandrine Loncke, of the University of Paris 8.

“This is the only film to offer in-depth Wodaabe perspectives on the striking performances of these West African herders. Sandrine Loncke´s compelling and beautiful work is unlike any other film about the Wodaabe of Niger; it provides fresh images and insightful commentary that effectively reframe common stereotypes and misunderstandings about the Wodaabe. This makes the film an invaluable resource for teaching about African Studies, cultural anthropology, performance, pastoralists, music, and dance, letting students learn directly from Wodaabe comments and stories and providing the historical and social context required to understand the performances.” — Corinne A. Kratz, Prof. of Anthropology and African Studies, Emory University

“As it moves from domestic discussions and children´s play to dramatic and beautiful performance of a central Wodaabe ritual, this wonderful film shows how song and dance can be used to shape identities and to cement relationships between groups. Focusing on a central ritual for adolescents and young men and women, the film engagingly presents different perspectives on the events by elders, women, and youths. The film reveals the Wodaabe to be thoughtful actors in a complex modern world and a shifting ecosystem. By avoiding narration, the ideas presented come from the Wodaabe themselves as the events build to the ritual´s final events. This film would be a tremendous addition to courses in socio-cultural anthropology, ethnomusicology, African studies, and ecology.” — Anthony Seeger, Distinguished Prof. of Ethnomusicology, Emeritus, UCLA

“A superbly crafted film that educators in anthropology, ethnomusicology, and cognate disciplines will most certainly find useful for several reasons. Perhaps foremost among them is the filmmaker´s respect for the Wodaabe´s self-representation, and for the validity of multiple perspectives. The stunning camera work depicting the Daddo ceremony, with a focus on the men´s Geerewol dance, engages the viewer from the first scene. We slowly learn the complex meanings of the event — in sustaining lineage and choosing or changing mates, in honoring cows that sustain life, and in mediating potentially difficult social relationships in a peaceful ritual context. We are privy to the lessons of an elder explaining Wodaabe traditions to a younger man, to comments by both men and women on events as they unfold, and to family life both in their home territory and that of other lineages who meet at the ceremony. This award-winning film will be useful in our documentary filmmaking course, and in a variety of anthropology courses including gender studies.” — Dr. Beverly Diamond, Canada Research Chair in Ethnomusicology, Memorial University

Additional sounds, images, and information may be found at the filmmaker’s web site, at: http://ethnomusicologie.fr/wodaabe-loncke/