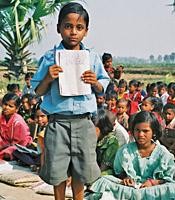 Bodh Gaya, the world’s most popular destination of Buddhist pilgrimage, is located in one of India’s poorest states. Visitors to this UNESCO World Heritage site are typically shocked by the extreme poverty there, and the Buddhist tradition of alms-giving motivates them to donate money. As a result, Bodh Gaya has developed a sophisticated charity “industry” which caters to and depends on tourists and tourism.

This thought-provoking documentary explores the complex, interconnected effects of tourism, globalization, culture, philanthropy, and religion in Bodh Gaya. Destination: Tourism provides a deeply perceptive and incisive ethnographic case study as well as a poignant illustration of the overwhelming challenges facing many of the world’s poor as they struggle to eke out a living in a seasonal economy almost completely dependent on foreign tourists.

As the film illuminates, the tourism economy’s volatile nature provides only seasonal and temporary work for local residents: time in Bodh Gaya is measured by the coming and going of strangers. For four winter months there are tourists, and therefore work. The rest of the year is marked by desperate unemployment. In addition, dozens of foreign-owned and foreign-operated monasteries function like all-inclusive resorts, monopolizing tourism services. The monasteries also inflate real-estate values: when farmlands become monasteries, farmers must find a new livelihood. Survival has become a challenge for Bodh Gaya’s residents.

In the search for sustainable employment, entrepreneurial locals have established hundreds of charity schools for destitute children. These village schools are entirely funded by tourist donations and have become a not-to-be-missed point on the Bodh Gaya tourist itinerary. The mud-hut schools and their slate-and-chalk students have become a “Kodak moment” for the visiting Buddhist pilgrims, and a means of livelihood for local residents.

Destination: Tourism will generate thought and discussion in any course dealing with international development and globalization, as well as a variety of courses in cultural anthropology, Asian and Indian studies, tourist studies, and religious studies. It was produced by Dafna Kory. The DVD version of the film is fully authored by the filmmaker and includes menus and chapter headings.

"This provocative film reveals the complexities of ´religious tourism,´ the ethical dilemmas of charity and philanthropy, and the heartbreaking realities of seasonal livelihoods in poor countries. The film narrates and analyzes these issues but does so with a smart touch. It does not preach to or patronize its audience. It asks compelling questions, highlights unusual encounters, and stimulates discussion through its self-reflexivity. I have shown the film in my large undergraduate class on international development and the students have found it to be moving and fascinating. They have learned as much from this film as from the treatises on international development and globalization they have read." — Ananya Roy, Assoc. Dean, International and Area Studies, and Assoc. Prof. of City and Regional Planning, University of California at Berkeley

"A well-crafted work, suitable for a variety of disciplines. It will stimulate discussion and debate in courses encompassing world religions, tourism, and globalization." — Thor Anderson, Visual Anthropologist and Lecturer, Dept. of Anthropology, San Francisco State University

"A great teaching tool! Raises questions about the tourism industry and leads to a multifaceted discussion about globalization, culture, and economics. The film is vibrant and layered, a multimedia experience that engages all of our senses: there is not a single dull moment. My students were captivated and intrigued by the presentation." — Mimi Chakarova, Graduate School of Journalism, University of California at Berkeley