From Our Strength: Birth and Indigenous Politics in Cañar, Ecuador 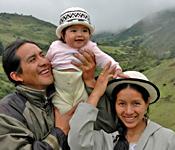 This unique ethnographic case study, filmed in the beautiful and diverse southern Andes of Ecuador, explores the shifting relationships between Ecuador’s indigenous peoples and the national government. The mothers, midwives, and nurses featured in the film have experienced illness and health under conditions of both criminalized and decriminalized traditional medicine. Their stories illustrate the complex relationships between indigenous politics, social change, and health-care choices.

In the words of Kim Clark, Prof. of Anthropology at the University of Western Ontario, the film will be pertinent viewing for “all classes in gender, inter-ethnic relations, medical anthropology, and Latin American indigenous peoples, and wherever students are challenged to understand the complex negotiations over rights, culture, and power that orient intimate choices in the early twenty-first century.”

The film skillfully interweaves intimate interviews with a variety of local women and documentary footage of two childbirths — one at the birth-mother’s home and the other in a village medical clinic — to motivate viewers to question common Western assumptions about “traditional” and “modern.” The film demonstrates that, even in an era of relentless globalization, the reasons for choices in childbirth practices are anything but straightforward.

While the indigenous people view Western, biomedical birth as more “modern,” they are at the same time choosing to integrate traditional and Western medicine during pregnancy and childbirth by relying on local midwives for prenatal care, then giving birth in clinics and hospitals rather than at home. Women are electing pain medications and epidurals, yet at the same time there is a strong resurgence of traditional midwifery in the last decade, corresponding to the powerful increase in indigenous rights during that time.

The film takes place in the rural market town of Cañar, the site of a vibrant spoke of the Indian Rights Movement. Among those featured in the film is Mama Mariana, a revered midwife and Ministry of Health nurse who is leading the movement to convince the State to allow midwives to assist in births at public hospitals and clinics.

With its intimate interviews, expressive visuals, and incisive editing, From Our Strength will engage students and generate thought and discussion in a wide range of courses in cultural and medical anthropology, Latin American and Indigenous studies, and women’s and gender studies. It was produced by award-winning filmmaker Patricia Keith and Suzanne Morrissey, Assistant Professor of Anthropology and Director of Gender Studies at Whitman College. The film is in Spanish and English.

“This outstanding film foregrounds the birthing experiences of indigenous women in Ecuador´s southern Andes and the perspectives of the indigenous midwives and nurses who attend them at home and in a private clinic. In presenting the various considerations that enter into women´s birthing choices, it highlights the many ways that forms of traditional medical knowledge and practices are being blended with allopathic medicine as a result of the political gains of Ecuador´s strong indigenous movement. It will be of interest for classes in gender, inter-ethnic relations, medical anthropology, and Latin American indigenous peoples, and wherever students are challenged to understand the complex negotiations over rights, culture and power that orient intimate choices in the early twenty-first century.” – Kim Clark, Professor and Graduate Chair, Dept. of Anthropology, University Western Ontario, author of Gender, State and Medicine in Highland Ecuador (Univ. of Pittsburgh Press, 2012)

“A wonderfully personal exploration of childbirth in Ecuador! I´m excited to share this documentary with my students. It will be greatly beneficial to educators who are interested in changing perspectives of childbirth practices, the intersection of Traditional and Western medicine, and the powerful personal stories of Cañari women and their childbirth decision making process. The political history of changes in Indigenous rights regarding personal healthcare is a wonderful addition to this documentary. This history also makes the film valuable to explore policy process and the need for the development of globalized healthcare focused on women´s health from a holistic perspective, especially among Indigenous populations.” – Kerensa Allison, Assistant Professor of Anthropology, Lewis-Clark State College

“I really like this film, and I would love to use it with my students. It´s refreshing to see a concrete example of competent, committed, articulate indigenous women (and men) working to improve biomedical health/birthing services. So many of the global health narratives are about so-called ´moderns´ providing service/assistance to destitute implied ´primitives.´ This is a timely and essential change in perspective.” – Lynn Morgan, Professor of Anthropology, Mount Holyoke College