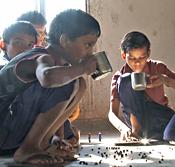 Gandhi´s Children chronicles the life of children in what the filmmaker calls “the exact opposite of Doon,” a shelter for orphans and juvenile detainees run by an Indian non-governmental organization. The Prayas Children’s Home for Boys is located on the northern fringe of New Delhi in Jahangirpuri, a resettlement colony whose residents were moved from inner-city slums several decades ago. It is still one of the poorest quarters of the city. The home was built in 1993, but its facilities are already deteriorating. There is broken plumbing, defective lighting, and other problems. The boys live in dormitories ranged around two central courtyards.

The home provides food and shelter for 350 boys. Some are orphans, some have been abandoned, others have run away from home. About half were picked up from the streets for minor crimes and are held under a court order. Living in the institution for several months, MacDougall explores its routines and the varied experiences of individual boys, including one who had been abducted from his family, one who was a seasoned street-dweller, another who was a pickpocket, and another who had been separated from his family during a fire in his slum area.

Despite the harshness of their lives, many of the boys show remarkable strength of character, knowledge, and resilience. Often left to their own devices, they institute a seemingly arbitrary set of checks and balances to make sense of the chaos around them. Then one day 181 new boys arrive, having been “rescued” in police raids from sordid child-labor factories. The new children place additional strains on Prayas’s already deteriorating facilities. The institution does what it can, but is it enough?

Gandhi´s Children is filled with scenes of great nuance and sensitivity and its extraordinary succession of revelatory moments exemplifies why David MacDougall’s work is unique among the world’s greatest ethnographic filmmakers. Destined to become another MacDougall classic, Gandhi’s Children will motivate thought, analysis, and discussion in a wide variety of courses in cultural anthropology, Asian and Indian studies, visual anthropology, education, and Third-World studies. It was produced by David MacDougall. It comes as a single dual-layered DVD.

“A compelling and unforgettable film. With characteristic rigor and compassion, David MacDougall explores the lives of India´s lost children. His portrait of the Prayas Children´s Home for Boys, located in one of Delhi´s poorest neighborhoods, reveals the extraordinary resilience and humanity of children in the face of a world that has cast them out — sometimes violently, sometimes accidentally, sometimes indifferently. MacDougall does not flinch from what he finds, neither sensationalizing nor sentimentalizing his young subjects and their situation. This important film will serve to catalyze discussion across a range of academic and non-academic contexts. It raises timely and pressing issues about the nature of childhood, processes of learning, the ethics of intervention, social responsibility and public policy, and, of course, ethnographic filmmaking itself. The intellectual curiosity and generosity of the filmmaker touch every scene. Gandhi´s Children is perhaps David MacDougall´s most remarkable achievement to date.” — Anna Grimshaw, Assoociate Prof., The Graduate Institute of Liberal Arts, Emory University

“Gandhi´s Children offers us a magnificent master class in the use of film to evoke the sensorial quality of a ´total institution´ and the way in which its social aesthetic shapes the minds, bodies, identities, and temporal routines of its inmates.” — Paul Henley, Prof. of Social Anthropology, University of Manchester (UK)

“MacDougall has produced some of the most lucid and thought-provoking writing on nonfiction filmmaking to date in his books Transcultural Cinema (2006) and The Corporeal Image (2008), which have become primary texts for students of visual anthropology. When we consider Gandhi´s Children with these texts, we are given a rare opportunity to examine how a filmmaker develops a series of interrelated ideas through two complementary practices of critical thought — one in text, the other in digital video. Together they form a solid foundation for thinking about, among other things, how social aesthetics shape the way we come to know the world, how lessons about self and other are corporeally ingrained, and, more specifically, the role institutions play in forming a child´s sense of being and potentiality. And, for those among us who still need convincing, together these works make a strong case for filmmaking as a practice that contributes to anthropological and critical theory, not merely as educational tools to be ´read´ or mined for their explicit content but because they expand our understanding of how we know and make sense of the world.” — Stephanie Anne Spray, Anthropology Dept., Harvard University, in Current Anthropology (Vol. 52, No. 5, October 2011)

“Remembering, telling, filming, that´s the complex process, both enjoyable and painful, which documentary cinema essentially makes visible. Gandhi´s Children is a new masterpiece by David MacDougall, who has lent his imprint to both the practice and theory of ethnological cinema since the 1960s. Gandhi´s Children tells of the boys in a shelter in Jahangirpuri, Delhi. You see them in their daily routine – making beds, having lessons, washing their clothes, the pranks of the older boys – but beyond that they tell of all the things they´ve already had to experience in their relatively short lives. There are criminal children among them, handed over by the police, but also orphans, outcasts, the abused. A tender joy beams from their faces as a couple of small pickpockets praise the artistry with which they pinch a mobile phone from a stranger´s pocket, and mimic the movements with their fine-featured hands. In a wondrous corporeality MacDougall captures the essence of these lost Indian boys, in a tone that is matter-of-fact, unsentimental – brothers in the spirit of Oliver Twist and the Artful Dodger.” — Fritz Gottler, Film Critic, Suddeutsche Zeitung

“Has the same power as De Sica´s Shoeshine. … [The] children are never romanticized but [are] always seen as full persons, not ´grown up´ but able to ´be up´ to adults. Moreover, their agency and sense of dignity is so high that we start wondering… whether children can teach us to be better persons, not moralistically speaking, but in the sense of in full contact with the most important values and modes of life. MacDougall is able to look deeply into everyday practices of hygiene, friendship, loss, remembrance, and survival in an institution that is hard to judge, for it protects and represses at the same time, it captures but gives shelter at the same time…. [It is] impossible to see bad and good guys in such profound films! Hurrah to ethnographic methods; they enrich film, as film enriches ethnography.” — Rossella Ragazzi, Research Fellow, University Museum, University of Tromsø (Norway) and director of the film La Mémoire Dure