Kahyangan: The Balinese Journey of the Soul 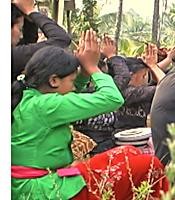 This remarkable and at times mesmerizing documentary explores the full cycle of Balinese death rituals that support and protect the soul’s journey in its endless cycle of life, death, and rebirth. The specific ceremonies, which vary according to social and economic level, family tradition, and individual circumstance, are linked through Hindu-Buddhist tradition and the centrality of various Balinese forms of gamelan and vocal music that validate the rituals, protect the deceased, and guide the soul on its journey.

Tied together by the shadow-play story of Cupak, a mortal who traveled to the land of the dead to find his father (Lord Brahma/God), and shaped by Meluasan (a visit to a traditional psychic to determine the wishes of a deceased for their upcoming ceremonies), the film documents elaborate ceremonies for persons of wealth and social distinction along with equivalent ceremonies for commoners. The ceremonies aim to return the body to the five elements: earth, water, fire, space, and wind, and to reunite the soul with God.

The ceremonies examined include body washing and beautification, burial, mass exhumation, individual and mass cremation, arranging of bones, releasing ash into streams, reclaiming purified souls from the sea, introducing the spirit to the Gods, and bringing the spirit home to the family temple. Viewers are provided with a rare opportunity to witness both public and private ceremonies captured with unflinching attention to detail.

Kahyangan is the second film (see also Kawitan: Creating Childhood in Bali) in a projected cycle of documentaries portraying the principal life and after-life ceremonies in Balinese Hindu-Buddhist religion and culture. The film is a collaboration between ethnomusicologist Linda Burman-Hall and director Eli Hollander, both of University of California Santa Cruz. It will stimulate thought and discussion in a wide range of courses in Asian and Balinese studies, cultural anthropology, ethnomusicology, and religion.