Keep Her Under Control: Law’s Patriarchy in India 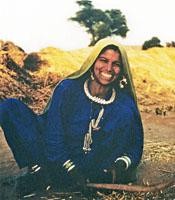 This provocative documentary, which explores the role of women in a Muslim-dominated village in Rajasthan, in northern India, is original, compelling, and instructive, and it is sure to stimulate discussion and analysis in any course that studies gender roles, Islam, India, or cultural anthropology.

The film focuses on the dramatic story of a woman, named Hurmuti, who refuses to live by the moral and legal codes of the village’s Islamic patriarchy. Hurmuti is the eldest wife in an extended family, but she has had a long-term — and well-known — affair with another man in the village. The film examines her conflicts with her extended family and with the all-male Islamic Village Council over her own conduct and over her insistence on the right to arrange the marriages of her pre-pubescent daughters.

As Hurmuti’s fascinating story unfolds it is interwoven with scenes that illustrate the process of growing up female in the village: the play of children; the talk and the duties of adolescent girls; marriage customs; dowry issues; relationships with mothers-in-law; rights to land ownership; and even spirit possessions.

Viewers will experience a wide range of emotions, grapple with an array of stimulating questions, and in the end be forced to consider how Hurmuti’s life options would have been different if she had been born male.

The film is based on ethnographic research carried out in Rajasthan over the past two decades by the producer, Prof. Erin Moore, of the Dept. of Anthropology, Univ. of Southern California. An in-depth Instructor’s Guide sheds additional light on the issues covered in the film and provides background information on Indian and Muslim social and legal customs.

"Brings a social drama vividly to life…. Infused with a profound understanding of the dynamics of social conflicts and the predicaments of Indian women, this film will captivate students and scholars of anthropology, gender studies, and South Asia." — Isabelle Nabokov, Asst. Prof. of Anthropology, Princeton Univ.

"An engaging depiction of an unusually independent village woman´s resistance to the constraints of family control. It will be sure to provoke discussion on women´s roles and options in rural India, the intersection of multiple legal systems, and the dynamics of change." — Serena Nanda, Prof. of Anthropology, John Jay College of Criminal Justice

"A fascinating ethnographic document of one courageous Rajasthani woman´s agency and resistance. The film has the immediacy of visual field notes and it will provoke discussion in courses on cultural anthropology, South Asia, women´s studies, and law." — Kirin Narayan, Prof. of Anthropology and South Asian Studies, Univ. of Wisconsin, Madison

"Offers a vivid portrait of family, community, and gender relations in a Muslim-dominated Indian village. The film succeeds in demonstrating the ways that patriarchal hegemony is reproduced through custom, socialization, and ritual, in addition to sometimes being directly resisted by women. Courses in women´s and gender studies will benefit from the ways that the film portrays the dynamic process of ´patriarchal bargains´ in the village: the film explodes the myth of the passive ´traditional third-world woman,´ while at the same time demonstrating the stubborn persistence of patriarchy." — Michael Messner, Prof. of Sociology and Gender Studies, Univ. of Southern California