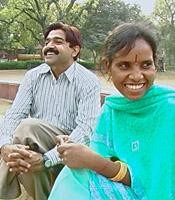 This engaging documentary explores the changing urban life of a contemporary India caught between local tradition and the effects of globalization. The film provides a richly detailed portrait of the lives of residents of Kotla Mubarakpur, an “urban village” in South Delhi, by focusing on the family of Sarita and Raman Bhardwaj and their friends and neighbors.

Framed by the evocative streets, footpaths, alleyways, courtyards, bedrooms, and sitting rooms of Kotla, the film examines the ways in which the texture of urban spaces is woven into ideas of belonging, intimacy, friendship, ambition, control of one’s life, and the desire to be “here” but also somewhere else.

Raman’s family came to Kotla in the wake of the Partition, while Sarita moved from Nainital after marrying. Raman is concerned about the effects of television on his children, and prefers “chatting” on the internet, whereas Sarita battles to have the recently disconnected cable TV restored. The Bhardwaj’s acquaintances include Jaidev, who is an aspiring musician, Arnima, who wants to be a movie star, and the local policewoman, who is as friendly with fellow members of her Gujar community as she is with the local “Bad Character.”

The exploration of urban life is emerging as a key area of study worldwide, sparked by the increasing effects of globalization upon previously isolated urban communities. Particularly significant is the meaning of locality and neighborhood in a time of transnational flows. How do people create meaning in their lives and make decisions regarding belonging and place at a time of such dislocation and change?

Kotla Walks makes thought-provoking connections between the global and the local while providing keen insight into the social meaning of space as well as the changing politics of gender and intimacy. It will generate analysis and discussion in a wide range of courses in Indian and Asian studies, globalization and development studies, urban studies, anthropology, and sociology. It was produced by Sanjay Srivastava and Simon Wilmot, and is in Hindi and English with English subtitles.

"An intimate and lovingly-shot exploration of the meaning of locality for the inhabitants of one of the older enclaves of New Delhi. Many films show us neighborhoods, but Kotla Walks is unique in its evocation of the varieties of attachment people have both to their local spaces and to their visions of the wider world. The close relationship that the filmmakers established with the main family filmed is evident throughout." — David MacDougall