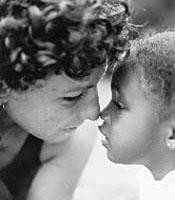 This classic and universally acclaimed documentary demonstrates the importance and the delights of experiencing one’s body. It provides a unique record of dance therapist Janet Adler working to develop movement awareness with normal and emotionally disturbed children and with a group of teachers.

The highlight is an unforgettable sequence in which Adler works individually with two autistic girls aged two and five and gradually, through body movement, brings them out of their shells and isolation. She begins by trying to enter their world in their terms, and reflects their movements until they recognize her responses.

Little by little each child develops trust in the relationship until they transform it into an infantile and symbiotic mother-child relationship: they want to be held constantly and explore all parts of the therapist’s body. Finally, each child becomes aware that the relationship consists of two different people, and the film captures the joyful emergence of physical and emotional experiences shared for the first time.

Janet Adler comments that in our over-intellectualized society we tend to forget that our first sense of the world was a body sense, and that the more we can reduce the gap between body language and verbal language, the more honest we can be with ourselves and others. For a more recent work featuring Janet Adler, see “Still Looking.”

“Looking for Me” is of interest to anyone concerned with autism, mental health, nonverbal communication, movement therapy, and psychology. It was directed by Virginia Bartlett and Norris Brock for the Shady Lane School in Pittsburgh, Pennsylvania. It was written and narrated by and features Janet Adler.