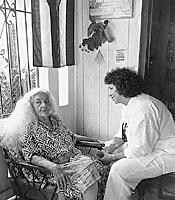 This wide-ranging and much-honored documentary explores Puerto Rico’s rich cultural traditions and untold history, revealing the remarkable stories of its revolutionaries and abolitionists, poets and patriots — all of whose struggles for national identity unfold within the complex web of relations between Puerto Rico and the United States.

The film moves fluidly between Puerto Rico itself and New York’s South Bronx barrio. By illuminating the past, examining the present, and bringing Puerto Rico’s vibrant cultural heritage to audiences, the film illustrates why the political fate of this tiny Caribbean island concerns all Americans.

The style of the film is personal, intimate, and accessible to all students, with producer/writer Raquel Ortiz serving as on-screen host and narrator. Her participation in the process of learning about her own heritage infuses the film with an engaging dynamic of discovery and interaction. Traditional Puerto Rican music — including storytelling plenas — punctuates the film, while noted Puerto Rican artist Juan Sanchez’s collages — composed of striking graphics, images from the past, and symbols from popular culture — provide an innovative method of presenting history, as visual elements from the collages are “assembled” and “disassembled” on screen.

"A passionate but wistfully hopeful documentary that makes excellent use of vivid artworks, great archival photos and rarely seen newsreel footage…. A most moving experience." — The Village Voice

"This engaging, effective, and powerful film brings history to life and stimulates classroom discussion. It is remarkable for the breadth of its scope, the depth and variety of its material content, and for its effect on the audience. It is not only a social, political, and economic history of the island, but is also an exploration of the complex relationships between Puerto Ricans on/from the island and those on the mainland. The film makes large socio-historical forces concrete, comprehensible, and intriguing; it also makes history real and appealing: dynamic, personal, and palpable. At a time when so many critical issues (identity politics, racial and ethnic polarization, immigration and transnationalism, and the role of the U.S. in the larger world) are being debated and discussed in classrooms across the country, it is not only beneficial to have such a catalyst for these discussions, it is essential." — Lucy Perez, Coordinator, Multicultural Studies Program, Holyoke Community College

"A young student was very moved because he discovered a history of Puerto Rico previously unknown to him. Never had he heard of the Massacre of Ponce or the Nationalist attack on Congress. There was a consensus among all present, that while the film was created for North American audiences, it was equally compelling for Puerto Ricans who are unaware of their own history." — Teresa Previdi, Coordinator, Cultural Activities, Univ. Sagrado del Corazon, Puerto Rico