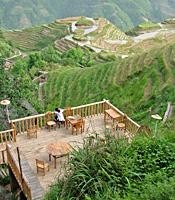 Tourism in China today signifies many things. To the Chinese government, tourism is a win-win opportunity to promote rural development and modernization and to encourage urban residents to flex their disposable incomes through domestic travel. To tourists – past, present, and future – it is the epitome of middle-class leisure, proof that the country has moved beyond the hardships of the past and toward a prosperous future. And to those who live in the sites that are visited, tourism is a means to an end, a chance to earn a living by turning one’s home into a destination.

In the words of Dr. Stevan Harrell, Prof. of Anthropology at the Univ. of Washington, “This colorful, entertaining, gently ironic documentary presents a vivid and sensitive portrait of a side of China that is little known outside the country: the world of ethnic tourism. In recent years, hundreds of millions of Chinese tourists, mostly city-dwellers, have used their newly increased incomes to travel. And many of the places they visit are ethnic minority villages in China’s West and Southwest. They go there for the culture, for the scenery, for the clean air, for something different to see and do.”

Peasant Family Happiness depicts the everyday experience of “doing tourism” in two rural ethnic tourism villages in contemporary China: Ping’an in the Guangxi Zhuang Autonomous Region and Upper Jidao in Guizhou Province. In these villages, residents negotiate between the day-to-day consequences of tourist arrivals and idealized projections of who they are. Questions of “authenticity” are rendered secondary to, yet not entirely subsumed by, market imperatives.

Culture and identity remain important for sustaining community, but in ways that reveal just how much labor goes into creating leisure experiences. What really matters to the villagers of Ping’an and Upper Jidao are the bigger, more pressing questions confronting modern rural communities across the globe: the possibilities brought about by improved transport networks, the promises and perils of leaving one’s home to be a migrant worker elsewhere, and the pleasures of imagining one’s own future through the lens of successful, profitable tourism.

Peasant Family Happiness was produced as part of a larger anthropological research project on tourism and rural development in China today. Various scenes, a rough cut, and the final film were screened in both Ping’an and Upper Jidao villages on multiple occasions.

With its “deft and intimate camera work,” its stunning visuals of spectacular rural landscapes, and its “insightful, vivid, and intelligently humorous” paradoxes and ironies, Peasant Family Happiness will thoroughly engage students and stimulate reflection and discussion in a wide range of courses in cultural anthropology, China and East Asia, development issues, ethnicity and identity, and tourism. It was produced by filmmaker/anthropologist Jenny Chio, of the Dept. of Anthropology, Emory University.

“This colorful, entertaining, gently ironic documentary presents a vivid and sensitive portrait of a side of China that is little known outside the country: the world of ethnic tourism. In recent years, hundreds of millions of tourists, mostly city-dwellers, have used their newly increased incomes to travel. And many of the places they visit are ethnic minority villages in China´s West and Southwest. They go there for the culture, for the scenery, for the clean air, for something different to see and do. In Peasant Family Happiness, Jenny Chio takes us inside the world of those who make themselves and their villages look good for the tourists. Entirely through interviews and recorded conversations, with nary a voiceover in the whole production, Chio shows us the tourist encounter through the eyes and voices of the villagers themselves. In doing so, she turns the tables on the usual touristic documentary, which marvels at the strange or quaint practices of the locals, instead presenting the villagers as the ´normal,´ rational actors and the tourists as the oddballs that need explaining. Because the villagers and their villages do, in fact, look good for the tourists, the film also looks good… we want to go there even as we think we would feel a bit guilty about going there as a tourist. The ironies and paradoxes of Peasant Family Happiness, along with its attention-grabbing bright colors and sharp images, will make it a great teaching tool for classes about tourism, globalization, ethnicity and identity, or anything regarding China or East Asia.” — Stevan Harrell, Professor of Anthropology, University of Washington

“Insightful, vivid, and intelligently humorous, this documentary is essential viewing for anyone who wants a true insider perspective on ethnic minorities and tourism development. It artfully raises complex questions about the best role of governments, local community, individual entrepreneurship, and education in development.” — Mayling Birney, Assistant Professor, Dept. of International Development, London School of Economics

“Peasant Family Happiness is an engrossing portrait of two ethnic villages pursuing tourism for economic development. Filmmaker Jenny Chio has a knack for capturing everyday interactions that speak to the confusions and ambiguities of a tourist economy. With her deft and intimate camera work, Chio depicts the practices and rhythms of rural tourism, where locals don ethnic costumes (not necessarily their own), sell ´handicrafts´ (not made locally or by hand), make ´traditional´ food, provide song and dance performances, and haul tourists, garbage, and machines deemed essential to development into village settings. Chio´s film delights and illuminates in its focus on the people who work to make tourism pleasurable, showing their constant efforts to maintain appearances so that the villages ´sell.´ In their efforts to capitalize on the terraced landscapes and distinctive architectural forms created through generations of hard physical labor, locals stoke and manipulate outsiders´ fantasies about rural life and minority populations. The film reveals the challenges and opportunities that tourism entails for villagers, as it changes the nature of work, expectations for the future, understandings of the past, and offers simultaneously hope for improvement and the pressures of competing in a service industry.” — Maris Gillette, Professor of Anthropology, Haverford College

“Chio´s film… provides us with a rich and vivid account of the challenges of developing and sustaining rural tourism from the vantage point of rural communities. It provides students with a contemporary view of rural China, which in the southwest is characterized by the commodification of ethnicity and striking economic polarization between China´s urban and rural residents.” — Emily Chao, Professor of Anthropology, Pitzer College, in the American Anthropologist

“As charming and picturesque as it sounds, Peasant Family Happiness is also a revelation. Introducing us to friends she has made researching in Southwest China, Jenny Chio gets under the rural tourism policy the film is named after to show us what it means for them. Employment enables young people to stay in the village instead of working in the city, but only by packaging themselves as spectacles for bus tours. With a little self-reflexivity, Chio stops easy judgments and makes us ponder the consequences.” — Chris Berry, Professor of Film Studies, King´s College London

For more information on Jenny Chio, her work, and a link to a trailer of the film, visit her web site at www.jennychio.com. An ethnography of tourism in rural ethnic China, written by Jenny Chio, is available from the University of Washington Press: http://www.washington.edu/