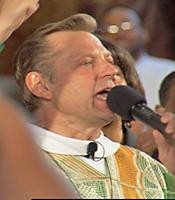 Regarded as a hero by many and a renegade by some in the Catholic Church hierarchy, Michael Pfleger, longtime pastor of Chicago’s St. Sabina parish, has consistently used the power of his pulpit to battle social inequity and engage in high profile campaigns to end drug-dealing, prostitution, and the exploitation of the poor by liquor and tobacco companies.

This powerful and thought-provoking documentary captures the charisma of the crusading priest while it explores the tensions between the Catholic Church and its African-American flock.

Mike Pfleger almost defines the word iconoclast: He is a white priest in a nearly all-black parish; an outspoken maverick in a rigidly conservative archdiocese; a preacher whose sermons are more akin in style and tone to Black Baptist traditions than to White Catholic. He has repeatedly challenged orthodoxy — from his adoption of three boys to his frequent political activism — making him a constant irritant to the Church hierarchy. Yet Pfleger has also transformed a dying parish into one of the city’s most vibrant, while leading the economic revival of one of Chicago’s most impoverished neighborhoods.

Radical Disciple relates the remarkable story of this Catholic rebel and in so doing examines such broader contemporary issues as the frayed relationship between the Church and the African-American community, the power and importance of the mass media in shaping people’s perceptions, and the tension between the social consciousness of Pfleger’s “gospel of the streets” and traditional notions of religious “neutrality” in political issues.

The film investigates the early influences that motivated Pfleger to devote his life to fighting racism and injustice, especially his shock at witnessing the bitter protest against Martin Luther King, Jr., in Chicago’s Marquette Park in 1966, and shows how he has learned to “use” the media in a sophisticated way to spread awareness of his message. It also documents how Pfleger’s larger-than-life personality sometimes becomes a story in itself and obscures the larger issues he is addressing, such as with his notorious rant against Hillary Clinton during the 2008 Presidential contest.

Radical Disciple and its charismatic subject will engage students and inspire thought and discussion is a wide variety of courses in sociology and social issues, American studies, ethnic studies, communication and the media, and religious studies. It was produced by Bob Hercules.

"This outstanding film is much more than a biography of a white Catholic priest serving an urban African-American church. This richly engaging film chronicles the tension-filled history of white flight and racism in Chicago and tells the story of a prophetic priest and activist who helps to rebuild a community within the crucible of public and media controversy. This is a great film for scholars, students, and anyone else who is inspired by seeing faith put into action — where those in the pews take to the streets, and the pulpit meets the public square." — Professor Frank Yamada, McCormick Theological Seminary

"This film launched a vigorous discussion about race, ethics, and the media in my classroom. Pfleger´s story quickly leads students to reflect on their own feelings and experiences with racial ambivalence. They understand how even the best intentions can be misunderstood in a racially-charged media environment." — Elizabeth Coffman, Associate Professor, School of Communication, Loyola University Chicago, Director, International Film and Media Studies

"This excellent classroom tool captures the charisma and energy, as well as the storm of debate, that centers on the pastor of Chicago´s St. Sabina´s Catholic Church. Here are both Fr. Pfleger wrestling with demons and leading his African-American parish, as well as his critics who question Pfleger´s tactics and motives. This film explores an important slice of life in Chicago´s turbulent history. The film will stimulate classroom discussion regarding racism, poverty, and the role of vital institutions in urban America." — Dominic A. Pacyga, Professor of History, Columbia College

"One thing seems certain. More than most priests, [Pfleger] has brought material change to the community and transformed his parish. Some of his most passionate actions can be seen as practicing the teachings of Jesus quite literally. Bob Hercules´ documentary assembles archival and new footage and interviews into a comprehensive portrait. If you´ve heard of Father Pfleger and want to know more, here is the place." — Roger Ebert, Film Critic, Chicago Sun-Times

For Roger Ebert´s long and interesting review of “Radical Disciple,” go to rogerebert.suntimes.com/