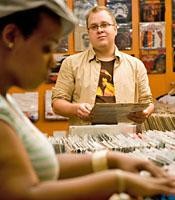 As the American music industry struggles to find its place in the digital world, many music enthusiasts, audiophiles, and DJ’s continue to buy and collect vinyl records, sometimes to their financial and emotional detriment. This remarkable documentary, shot over a three-year period, explores the various urban subcultures at an independent record store in Philadelphia, focusing on the store’s owners, employees, and customers. Although divergent in musical taste and style, they are all united as self-identified vinyl addicts.

With a keen ethnographic eye, filmmaker Matthew Durington captures telling commentary and provides a compelling case study of the addictive drive to collect that cuts across all cultures. The film also examines such topics as the relative value of material culture and how the world of popular urban music relates to larger social issues such as race and gender.

One of the film’s prominent themes is the racial and class issues that arise from the fact that the record store caters to a largely African American customer base that buys urban music (i.e., Rap and Hip Hop), yet the store itself does not reflect this customer base in its ownership and employees. Consequently, the employees are forced to deal with their own racial identities in addition to the racial and class dynamics of their urban clientele.

Record Store is a rich and vital cultural portrait that will draw and hold the attention of today’s digital-age students. It will inspire reflection and generate discussion in a wide variety of classes in American studies, sociology, cultural anthropology, social psychology, communication, and popular culture. It was produced by Matthew Durington.

"Anyone interested in the intersections of technology, popular culture, race, and gender in contemporary America — not to mention a charming and quirky view of passionate collectors — will want to see this delightfully gritty film. Recommended for courses in culture and communication!" — Faye Ginsburg, Prof. of Anthropology and Director, Center for Media, Culture & History, New York University

"Combining the careful power of robust ethnographic observation with the expansive and ambitious rigor of a quite sophisticated theory of material culture, Matthew Durington has crafted an important and engaging visual documentation of an important institutional space for the production of social community and individual subjectivity: the local Record Store. This important new film demonstrates the productive sparks that fly when anthropology meets visual studies in a complicated and thoughtful manner." — John L. Jackson, Jr., Richard Perry University Assoc. Professor of Communication and Anthropology, Annenberg School for Communication, University of Pennsylvania

"This fascinating ethnographic exploration raises provocative and timeless questions about the connections between our personal and social identities and the material things we cherish and desire. It vividly illustrates the world of vinyl record collectors from the inside out. In the classroom the film holds students´ interest, challenges their interpretive analysis, and provokes spirited discussions. I enthusiastically recommend it for a wide range of courses in sociology, popular culture, American studies, communication, and anthropology." — Douglas W. Pryor, Assoc. Prof. of Sociology, Towson University

"A great teaching tool and introduction to anthropology! The film immediately grabs the attention of students through its treatment of music subcultures, which resonates with the mp3 generation. The investigation of music, DJ´s, and vinyl in urban Philadelphia counters the assumptions that anthropology is about ´others´ or about the past. The film provides the viewer with crucial insight into how ethnography gets done, as well as demonstrating the role of anthropologists in the construction of their work. The film brings together traditional ethnographic methodology with music and film through aspects of contemporary American culture, expanding the reach of ´classical´ anthropology to new audiences and new subjects. I have used the film with much success in introductory courses on cultural anthropology as well as in upper division classes on mass media, visual anthropology, and ethnographic film." — Prof. Stephanie Takaragawa, Dept. of Sociology and Anthropology, University of Redlands