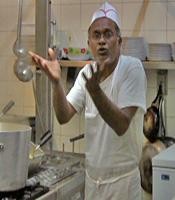 This delightful and mouth-watering documentary provides a “backstage,” behind-the-scenes foray into the rhythms of food preparation in four traditional restaurants in Rome. Behind the stately courses of a modern Roman meal — antipasto, pasta, perhaps a diversion into pizza, then a main course, vegetable specialty, and dessert — lies another, more frantic tempo, hidden behind the swing doors of the kitchens. This is the space, as one restaurant owner remarks, that the customer doesn’t get to see.

As orders start arriving and organized confusion intensifies, the film explores the cultural diversity behind one of the world’s most self-consciously traditionalizing of cuisines, its origins allegedly lying in ancient Roman recipes conserved by the Jewish culture of the ghetto but augmented by the pork-accented food of the hinterland. This dietary confusion now also confronts the Muslim Bangladeshis who constitute much of the restaurant labor force but who have adopted the Roman attitude of “accommodation” by treating work and religion as separate domains of life.

Together the food artisans of Rome generate a kaleidoscopic feast of taste, smell, motion, and vision that will generate thought and discussion about culture, cuisine, and tradition in a wide array of courses. Roman Restaurant Rhythms was produced by Michael Herzfeld, Professor of Anthropology and Curator of European Ethnology in the Peabody Museum at Harvard University. The film is in Italian with English subtitles.

"This film offers a delightful and candid behind-the-scenes view of the orchestration of food preparation in four restaurants in Rome. In following the preparation of multiple courses — from appetizers to pasta to dessert — the film captures both the sensory and social dimensions of the craft of cooking. From the owners of family-run restaurants to the Bangladeshi cook who has learned to recognize when the pasta is ready simply by looking at it, we learn that cooking the Roman way is an embodied practice. By allowing its subjects themselves to explain and comment on their culinary skills, the film challenges conventional views of culture. It will provoke the productive rethinking of ideas about tradition, culture, and cuisine among students in a wide range of courses in anthropology, cultural studies, and Italian studies." — Sylvia Yanagisako, Professor of Anthropology, Stanford University, author of Producing Culture and Capital

"A feast and highly recommended! By taking viewers into the kitchens of small Roman restaurants, the film provides insight into the significance of food and its preparation in Rome. On display are dishes characteristic of Rome, cooking skills passed on by apprenticeship from one generation to the next, and commentary by the cooks themselves, one of whom is a South Asian migrant. The film is excellent for courses that deal with the anthropology of food or the anthropology of Europe; but it would also be valuable for any course that touches on globalization, migration, the anthropology of work, ethnographic film, or ethnographic field methods." — Emily Schultz and Robert Lavenda, Professors of Anthropology, St. Cloud State University, authors of Cultural Anthropology: A Perspective on the Human Condition

"This delicious film portrays in kinesthetic detail the chefs and kitchens of four Roman restaurants. Anthropologist and director Michael Herzfeld focuses his camera on dexterous cooks as they steadily and rhythmically slice vegetables, chop octopus, peel roasted peppers, knead pasta, slide pizza in and out of ovens, and flip frying pans to stir gnocchi, mushrooms, and tomato-and-basil rigatoni. In both close-up shots of hands at work and wide angle pans of kitchens, the film reveals the hard physical work of cooking, the skill and organization of the chefs, the fresh ingredients, and the Roman pride in local food in simple honest restaurant kitchens. This film will delight and inform aficionados and students of food, Italy, and anthropology." — Carole Counihan, Professor of Anthropology, Millersville University, author of Around the Tuscan Table: Food, Family and Gender in Twentieth-Century Florence

"This delightful film offers an intimate glimpse behind the kitchen doors in one of the world´s great centers of delicious food. It offers the viewer a vivid and elegant introduction to everyday Roman restaurant kitchens, and you can almost smell and taste the gorgeous dishes as they are being prepared. There are many ways the film could be used in class to reflect on local food cultures, Italian regional cuisine, and the restaurant." — Richard R. Wilk, Professor of Anthropology and Director of the Food Studies Graduate Program, Indiana University, author of Home Cooking in the Global Village and editor of Fast Food/Slow Food