Sanpachando: St. Pacho Is for the Revelers 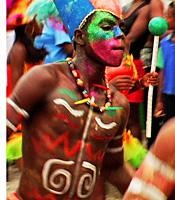 This exceptional and engaging documentary is an important contribution to the growing body of work on the African Diaspora and Latin America. It perceptively explores the intertwined cultural, religious, political, and afro-ethnic meanings of a vibrant festival honoring St. Francis of Assisi in Quibdo, Choco, on the northwest Pacific coast of Colombia.

Known locally as the Feast of San Pacho, this nearly month-long religious celebration reveals a cultural vitality that goes beyond typical pageants, becoming a multilayered event preoccupied with the community’s racial and ethnic history and its relationship to the region and the nation where it has evolved since the days of slavery. Interweaving memorable scenes of the festival’s lively music and dancing with first-hand commentary from local organizers, participants, and community members, the film sensitively probes the social, religious, and political foundations of the celebration and examines both its material and symbolic expressions.

Sanpachando is carefully designed for classroom use. It is divided into five “chapters” – anchored in local sayings and reflections – and vividly illustrates the political and socio-cultural complexity of the festival. The film clearly reveals that the apparent dichotomy between religious piety and material, worldly life that emerges during the festival becomes a cultural platform within which a robust afro-ethnic identity is constantly renewed and redefined.

The commentary provided by the different local participants examines topics related to political corruption, to the colonial history of this Colombian region and its relationship with national and international corporate exploitation, to the Colombian armed conflict that has so much impacted the lives of afro-Colombians (many of whom have experienced physical displacement over the years), and to the need for a sustainable autonomy that is as much cultural as it is territorial, political, and economic. The film also explores the relationship between Chocoan musical traditions, cultural identity, and religious fervor, further displaying the profound importance of the festival.

With its energetic documentary style and keenly observed sequences, Sanpachando will engage students and engender analysis and discussion in a variety of classes in African and African Diaspora studies, Latin American studies, economic development issues, cultural anthropology, comparative religion, and Third World studies. It was co-produced and co-directed by Daniel Mosquera and Sean Ferry.

Adding to the film’s educational usefulness, the DVD was completely authored by the filmmakers, with chapter markers and the ability to be viewed with or without English subtitles. It also includes an extra feature, titled St. Pacho, for Whom?, a complete 26-minute documentary by Daniel Mosquera that examines the 2002 festival of San Pacho, which took place shortly after a horrific massacre and violent displacement of inhabitants in a nearby province at the hands of guerrillas and paramilitaries, with the passive complicity of the Colombian government.

"I have used the film in two different cultural anthropology courses and have found it to be wonderfully provocative and pedagogically useful. The images of San Pacho floats, the vibrant music and dance and the insightful narratives of participants and community members have helped significantly to reinforce classroom discussions concerning the aesthetics of violence, the popular as political, and the creative variety within the African Diaspora. I highly recommend this film for classroom use!" – Derek Pardue, Asst. Prof. of Anthropology and International and Area Studies, Washington University

"This film achieves the crucial goal of the documentary filmmaker: It combines a passionate illumination with entertainment, as the viewer voyages into the Colombian community of Quibdo, Choco, and into the Carnival atmosphere and Festival of San Pacho. It is clearly a Colombian revelation of an African heritage that has been maintained through the ages. Connections with the African cosmology are clearly inherent in this very colorful and brilliantly photographed film. This is a must-see for scholars and researchers of the African Diaspora and in cultural aesthetics. It is also a treasure and welcome addition to the African American Studies curriculum very much in need of Afro-Colombian scholarly resources." – Niyi Coker, Jr., E. Desmond Lee Distinguished Prof. of African and African-American Studies, University of Missouri, St. Louis

"This work re-signifies the processes of construction of Afro-Yoruban peoples´ imaginaries and their symbolic values in the midst of the Colombian nation. They have transformed the mythical realities into a feast that gives them meaning. This film defends and promotes the transmission of knowledge that reaffirms one of the ways of relating within and among communities, ways that affect and transform their ways of knowing and their multicultural and social nature through these feasts." – Translated from a review by Prof. Fernando Tasceche, Universidad Nacional de Colombia, Bogota