Science or Sacrilege: Native Americans, Archaeology and the Law 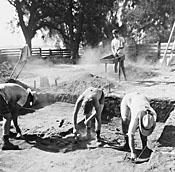 This provocative, in-depth documentary examines the Act´s underlying moral and political issues, its practical consequences, and the prospects for science in the post-NAGPRA world. Some (though not all) archaeologists and scientists claim that NAGPRA will prevent important study and research. Native Americans say that no one has the right to dig up and examine their ancestors´ remains.

Divergent realities of power, responsibility, and history make the debate vociferous, and simple answers impossible. This unique video is sure to provoke discussion and raise awareness in all courses in anthropology, archaeology, Native American studies, and museum studies. It was produced by Nicholas Nicastro.

The most up-to-date and insightful video available on the issues of repatriation and reburial. It fairly represents the continuum of opinion among both Native Americans and scholars. Issues aren´t presented simplistically as us versus them, science versus religion, or Indians versus archaeologists. — Larry Zimmerman, Prof. of Anthropology, Univ. of Iowa

Having screened it in my introductory archaeology class, I find this video remarkable for how many ideas it explores in just under an hour. Balanced and thoughtful, it provokes class discussion on a wide range of topics. — Thomas P. Volman, Prof. of Anthropology, Cornell Univ.