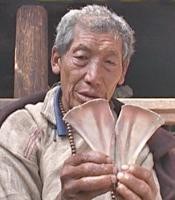 The Na people (also known as Moso) of southwest China, along the confluence of Chinese and Tibetan cultures, are best known in the West for their matrilineal kinship system. Western representations of Na culture usually overlook the significance of religion, a central aspect in the lives of Na people. This richly detailed documentary, created by Na directors Onci Archei and Ruheng Duoji and produced by American anthropologist and ethnographic filmmaker Tami Blumenfield, consists of five short pieces that capture important Na ceremonies.

In the words of Jenny Chio, Asst. Prof. of Anthropology at Emory University, Some Na Ceremonies “is one of the most unique yet accessible works of ’participatory video’ or community media produced out of China in the recent past.” Ranging from a village film festival, to a pig-sacrifice ceremony, to a three-day funerary ceremony, the ceremonies presented are riveting, elaborate, and meaningful. By avoiding interpretation or voice-over narration but using carefully selected visual images and thought-provoking editing, the film emphasizes the partiality of any representational attempt. The ceremonies presented are but a glimpse of a much larger ceremonial and spiritual world.

Some Na Ceremonies is an outgrowth of the Moso Media Project, a collaborative, participatory-media project that provides resources and training for Na people interested in creating and editing digital media, then facilitating community conversations about the finished films.

"Some Na Ceremonies is one of the most unique yet accessible works of ´participatory video´ or community media produced out of China in the recent past. Unlike other documentary videos made by amateur filmmakers who have been trained and guided, if not directed, by professional filmmakers and development workers, the value of the five segments contained in Some Na Ceremonies lies not only in the direct, observational mode of shooting but also in the truly collaborative spirit embodied in the explanatory text, titles, and broader context of production. The film will be especially valuable in courses dealing with contemporary society and culture in China, as well as concepts in cultural anthropology, as its content and themes speak directly to much of the scholarly literature on ethnic minority identity and heritage revitalization in China today, as well as the diversity and depth of religious beliefs and practices in contemporary rural lives. Furthermore, I find great teaching value in the structure of the film as a collection of some ceremonies. By not forcing the material into a standardized narrative form, Some Na Ceremonies provides a rich and challenging film for students to really engage in practices of critical viewing." — Jenny Chio, Assistant Professor of Anthropology, Associated Faculty, Film and Media Studies, Emory University

"Highly recommended! This fascinating work provides a rare look at a tradition which exists at the confluence of Chinese and Tibetan cultures. My own work focuses on Tibetan death rituals and shamanic journeys to the realms of the dead. The parallels and differences between Na and Tibetan ceremonies that the film reveals are endlessly intriguing. The fact that the footage was filmed and edited by members of the Na community make it especially valuable." — Alyson Prude, Assistant Professor of Philosophy and Religious Studies, University of Wisconsin, Whitewater