The Pilgrimage to the Sanctuary of the Lord of Qoyllur Rit’i: The Walk Experience 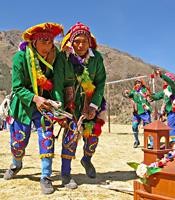 Once a year in the Cuzco region of Peru, the former center of the Inca empire, some 50,000 pilgrims flock to the highest sanctuary of the world to participate in the largest pilgrimage of the Andean region. The sanctuary of the Señor de Qoyllur Rit’i (Lord of the Shiny Snow) is located nearly 16,000 feet above sea level, at the foot of the Qollqepunku glacier.

Traditionally, pilgrims walked from their towns performing their music and dance to visit this miraculous image of Christ on a rock. Today, however, most pilgrims reach the area by truck or bus and only hike uphill the final five miles to reach the sanctuary. The pilgrimage combines longstanding Andean principles and practices and those brought into the tradition by Catholicism.

This insightful and beautifully filmed documentary focuses on the comparsas or dance troupes from the community of Pomacanchi, Cuzco, that continue the tradition of walking all the way to the sanctuary, covering 85 miles up and down mountains in three days and two nights, accompanied by the incessant music of flutes and drums. After another two-and-a-half days and two nights at the site, where they perform their ritual dances and participate in an unremitting musical experience, these Quechua-speaking pilgrims return home and leave the site deserted.

The film deftly interweaves footage from three separate pilgrimages in which the filmmaker participated to provide a close and detailed depiction of the pilgrims’ experiences and explore the importance of the unity of sound, sight, and movement to the construction of meaning and memory to them. Since Quechua-speaking Andeans best learn and remember through the integration of the three, their dance, music, and religious festivals are shown to be central to their social reality.

In addition to its remarkable depiction of the long and profound journey to the sanctuary, the film also includes scenes of important activities in the community of Pomacanchi before and after the pilgrimage, as well as remarkable footage of the ceremonial rituals at the sanctuary.

Colorful, intense, and absorbing, The Pilgrimage to the Sanctuary of the Lord of Qoyllur Rit’i will generate thought and discussion in a wide range of classes in Latin American and Andean studies, cultural anthropology, comparative religion, and ethnomusicology, and will be essential for any class studying pilgrimage traditions, religious practices, and indigenous performances in the Americas. It was produced by Zoila S. Mendoza, a Peruvian anthropologist and Professor of Native American Studies at the University of California, Davis.

“This documentary of the annual pilgrimage made by tens of thousands of Andeans to the sanctuary of the Lord of the Shiny Snow is breathtaking on account of the scenery and captivating on account of the liveliness of the music. It is an important contribution both to the anthropology of religion and the anthropology of the senses. Zoila Mendoza is to be commended for her excellent eye — and ear — as an ethnographic filmmaker, and her gentle way of commenting on the action without intruding.” — David Howes, Professor of Anthropology and Director, Centre for Sensory Studies, Concordia University, Montreal

“Other films of the Qoyllur Rit´i pilgrimage dwell on the spectacular setting and colorful dances, but this film is rare in following a single contingent of pilgrims from a rural community on their 85-mile trek through the Andean landscape. It reveals the celebrations at the sanctuary as but one aspect of the pilgrimage; the journey is a profound experience that intensifies over several days before reaching its peak in fervent devotional dancing in a sacred space. The narration clearly explains the significance of every stage of the journey and, along with the rare and colorful footage, makes the film engaging, accessible, and excellent for classroom use.” — Catherine Allen, Professor Emerita of Anthropology and International Affairs, George Washington University

“This evocative cinematic study of sensorial experiences is a unique and valuable teaching tool. Filmmaker Zoila Mendoza powerfully captures the beauty of the high Andes as well as the complexity of local indigenous performance. In doing so, she skillfully brings to light the critical importance of movement and the body in articulating one´s relationship to community, landscape, and the sacred world. The film provides critical insights for scholars and would serve well for undergraduate courses exploring pilgrimage traditions, religious practices, and indigenous performances in the Americas.” — Stella Nair, Assoc. Professor of Arts of the Americas, UCLA

“One of the largest and most important religious pilgrimages in Latin America, the annual festival of Qoyllur Rit´i in the Cuzco region of southern Peru is striking in every way: the stunning backdrop of the high Andes mountains, the deep devotion of its pilgrims, and the singular forms of music and dance that accompany the entire affair. Zoila Mendoza´s excellent new documentary takes us behind the scenes with one particular comparsa, or ritual group of pilgrims, as they prepare for and make the days-long trek to the sanctuary. While the film is of obvious interest to anyone learning or teaching about Andean or Latin American religious practice, the broader arguments that Mendoza makes about the unity of sound, sight, and movement as interwoven aspects of meaningful experience in Andean indigenous cultures also make this a compelling film for any course in the anthropology of performance. At 44 minutes, it is also the perfect length for classroom use. Highly recommended!” — Jonathan Ritter, Assoc. Professor of Music and Director, Latin American Studies Program, University of California, Riverside