The Reincarnation of Khensur Rinpoche 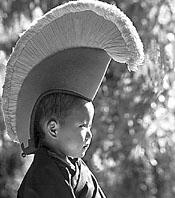 Choenzey is a 47-year-old Tibetan monk who lives in exile in a Buddhist monastery in southern India. His spiritual master, Khensur Rinpoche, has been dead four years. But according to Tibetan belief, the Rinpoche will be reincarnated and it is Choenzey’s responsibility to find the reincarnation and look after him. This utterly fascinating and compelling film follows Choenzey’s search and eventual discovery of an impish but gentle four-year-old who is recognized by the Dalai Lama to be the looked-for reincarnation.

Without sentimentality, this thought-provoking film captures the moving relationship that develops between the erstwhile disciple and his young master. The film’s exemplary combination of intimacy with its subjects and intellectual detachment will stimulate discussion, analysis, and interpretation in a variety of courses in cultural anthropology, Asian and Tibetan studies, Buddhist studies, and comparative religion. It was produced by Tenzing Sonam and Ritu Sarin in 1991, but not released to American educational audiences until 1999.

See also the filmmakers’ 2007 sequel, The Thread of Karma, which provides an intimate look at the life of the now 20-year-old lama as he aspires to live up to the reputation of his former incarnation.

"The film is simultaneously intellectually fascinating and emotionally moving. It provides a view of some of the more arcane aspects of the Tibetan practice to recognize the reincarnation of deceased religious masters, including a variety of rituals, meetings with the Dalai Lama, and rare footage of the Tibetan state oracle possessed by the deity. But it also offers a close glimpse of the intimate social interactions of the small group of monks who lovingly raise the young incarnate lama and gently encourage him to inhabit his role of religious teacher. This is an excellent teaching tool and a terrific work of filmmaking by a sympathetic and highly informed pair of directors." — Janet Gyatso, Prof. of Religion, Amherst College