The Thread of Karma 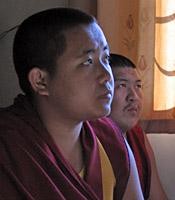 In 1991, filmmakers Ritu Sarin and Tenzing Sonam made The Reincarnation of Khensur Rinpoche, which followed the search of a Tibetan monk, named Choenzey, to find the reincarnation of his recently deceased master, Khensur Rinpoche, and documented Choenzey’s eventual discovery of a four-year-old boy recognized by the Dalai Lama to be the one. Without sentimentality, the film captured the moving relationship that developed between the erstwhile disciple and his young master.

Sixteen years later, the directors revisit the reincarnation at Drepung Monastery in South India, where he has been brought up within the age-old traditions of Tibetan Buddhist monastic life. He is now 20 years old, and his devoted attendant, Choenzey, continues to take care of him. His spiritual teacher is Geshe Wangchen, one of the most respected masters in the monastery, who was himself a disciple of Khensur Rinpoche.

The Thread of Karma offers an intimate look at the life of the young lama as he aspires to live up to the reputation of his former incarnation. It also explores his moving relationship with the two people closest to him, his attendant and his spiritual master, both of whom were connected to him in his previous life. By focusing on these ties that cut across lifetimes, the film paints a touching and insightful portrait of the Rinpoche even as it demystifies the Tibetan Buddhist tradition of reincarnation.

The Thread of Karma will engage students and generate discussion in a variety of courses in Tibetan and Asian studies, Buddhist studies, cultural anthropology, and comparative religion. It was produced by Ritu Sarin and Tenzing Sonam for White Crane Productions.

"The pair of films by Ritu Sarin and Tenzing Sonam, The Reincarnation of Khensur Rinpoche and The Thread of Karma, offer an unparalleled glimpse into the vibrant world of a contemporary Tibetan refugee monastic community. The films contain stunning footage of Tibetan Buddhist culture: we witness everything from an oracle in trance and the Dalai Lama confirming the identity of a reincarnate lama, to young monks working on their debating skills and doing their laundry. But the films do more than simply chronicle Tibetan monastic life; in focusing on the search for the reincarnation of a high Tibetan Lama and the subsequent education of the anointed child, they reveal the complex, touching, and eminently human relationship that develops between a teacher and his disciple. The filmmakers keep their own voices to a minimum, allowing the images, events, and key players to speak for themselves. As such, the films avoid the vapid romanticism and spiritual banalities that mar so many documentaries on Tibetan Buddhism. These films are a pleasure to watch, and are invaluable for classroom use." — Robert H. Sharf, D. H. Chen Prof. of Buddhist Studies, Dept. of East Asian Languages and Cultures, Univ. of California, Berkeley

"It has now been 50 years since Tibetan Buddhism was driven into exile. The challenges it has faced over this period are brought to life in this superb sequel to the captivating 1992 film, The Reincarnation of Khensur Rinpoche. Focusing on the present incarnation of one of the leading lamas of old Tibet, the film vividly documents the passing of the torch from one generation to the next, as the little boy met in the first film, now a young man, studies under the tutelage of the disciples of his former incarnation. A compelling portrait of the vitality of the tradition, the film not only documents the daily life of Tibetan monks in a monastery in south India, but also illuminates the themes of continuity and change for Tibetan Buddhism in exile." — Donald S. Lopez, Arthur E. Link Distinguished Prof. of Buddhist and Tibetan Studies, Dept. of Asian Languages and Cultures, Univ. of Michigan