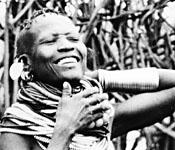 In this, the second film in renowned ethnographic filmmakers David and Judith MacDougall’s classic Turkana Conversations Trilogy, one of Lorang’s daughters, Akai, is going to marry one of his friends and age-mates, Kongu. Because of the close ties between the two men everything should go smoothly, but the pressures within the two families are such that the wedding negotiations over the bridewealth become increasingly tense.

Arranging the number and type of animals to be given as bridewealth demands an intricate balance between psychology and economics: Kongu must offer enough animals to please Lorang and his relatives, but not so many that he appears weak or foolish, or depletes his own family’s herds.

Negotiations drag on for several days, then threaten to break down altogether. The outcome depends not only on traditional patterns of behavior, but also on the influence exerted by Lorang’s wives and the manner in which Lorang chooses to resolve the dilemma that confronts him.

In Turkana, with English subtitles.

Note: Our DVD copies are now made directly from a newly restored and scene-by-scene color-corrected digital master painstakingly created by the filmmakers from their original 16mm film footage. Customers who previously purchased DVD copies should contact us for special discounted upgrade pricing on new copies.

“Cannot fail to appeal to a wide audience and to prompt discussions in any teaching situation.” — James Woodburn, Royal Anthropological Institute

“A funny, informative and thoroughly delightful documentary…. The Turkana people have allowed David and Judith MacDougall extraordinary access to the quarrels and customs that surround this wedding. Through the MacDougalls´ resourceful direction and their brisk, well-organized editing, this one social occasion becomes indicative of what the general life of the tribe is like.” — Janet Maslin, The New York Times

“Though modest in tone, the film demonstrates a structural sophistication well beyond that of almost any other documentary film work today.” — Bill Nichols, Prof. of Cinema, San Francisco State Univ., in Film Quarterly