To Live With Herds 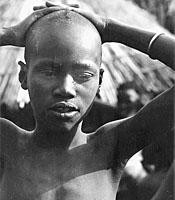 This classic, widely acclaimed film on the Jie of Uganda, produced by the renowned ethnographic filmmaking team of David and Judith MacDougall, examines the effects of nation building in pre-Amin Uganda on the seminomadic, pastoral Jie. Much more than an intrinsically interesting historical document, it has achieved classic status among ethnographic films owing to its remarkable success in developing a coherent analytical statement about its subjects’ situation, yet at the same time allowing them to speak for themselves about the world as they see and experience it.

The film explores life in a traditional Jie homestead during a harsh dry season. The talk and work of adults go on, but there is also hardship and worry, exacerbated by government policies that seem to attack rather than support the values and economic base of Jie society.

A mother counts her children; among them is a son she hardly knows who has joined the educated bureaucracy. Later we find him supervising famine relief for his own people in a situation that seems far beyond his control.

At the end of the film Logoth, the protector of the homestead, travels to the west to rejoin his herds in an area of relative plenty; at least for the time being his life seems free from official interference.

In Jie, with English subtitles.

"One of those rare documentaries that seem to have a life of their own… Mr. MacDougall´s camera is quietly there, observing all, missing nothing in this moving, penetrating, anthropological picture. No wonder it was cited at last year´s Venice Film Festival." — Howard Thompson, The New York Times

"Offers an admirable harmony of photographic and editorial styles. In few other films do tribal people speak so naturally and informally about themselves." — Roger Sandall, in Sight and Sound

"One of the most humorous, touching, informative, and (in both spirit and aesthetics) beautiful anthropological films I have ever seen." — Karen Cooper, Film Forum, New York City