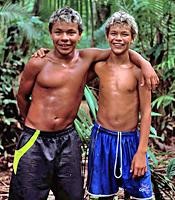 This innovative and thought-provoking documentary subtly explores the difficult issues that arise when the ethics of deforestation and the ethnographic encounter intersect. The film incisively poses the question: “Who has the right to cut… both trees and film footage?”

Seemingly an observational ethnographic immersion in life along the waterways where the sweet water of the Amazon basin mixes with the salty Atlantic Ocean, the film is suddenly interrupted by questions about the ethics of including images of deforestation, which could land the protagonist in trouble with Brazil’s environmental police. The editing waxes experimental, prompting the viewer to revisit editorial decisions, while bringing the family being filmed into the editorial decision-making fold.

The film ruminates on the global ethics of deforestation as it illustrates the relationship of deforestation to the harvesting of açai, Brazil’s latest boom crop that is now a key ingredient of popular energy drinks and a staple of Oprah’s diet. Açai is harvested by ascending into the tops of skinny palm trees, offering stunning visuals. The penultimate scene unexpectedly and evocatively ties the themes together in an act of animal acrobatics, defying the audience’s expectations.

The ecological connections between waterways, flora, fauna, and humanity subtly intertwine to make viewers contemplate all that we are losing in the continual deforestation of the Amazon as well as the multiple levels of complicity in that loss.

Trees Tropiques will engage students with its creative style and structure and generate thoughtful discussion in a wide variety of courses in Latin and South American studies, cultural anthropology, environmental studies, development issues, visual anthropology, and Third-World studies. It was produced by Alexander Fattal. It is in Portuguese with English subtitles.

“This striking film takes us on a half-hour visit to an island in the mouth of the Amazon basin, where families survive in part by chainsawing down the forest where they live. The film is visually captivating, from its opening — a sustained low-angle shot from a dugout canoe paddled by a restless teenager — to its metaphorical closing on an unusual beast hanging tenuously between two trees. But more than the visuals, I appreciate the piece´s warm humanity, capturing the subtle decision-making of fathers trying to support their families, teens choosing between studies and soccer, and women navigating their own roles in a world defined by men. These very particular, yet universal, themes interact impressively with the film´s investigation into the ethics of deforestation and documentary practice.” — Julie Mallozzi, documentary filmmaker and film instructor, Harvard Univ. and Massachusetts College of Art and Design