Under the Palace Wall 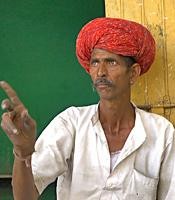 From the 16th century, the Indian village of Delwara in southern Rajasthan was ruled as a principality of the kingdom of Mewar. Its imposing palace, which overlooks the village, is now a luxury hotel — a world remote from the daily life of the villagers.

Following on from his film SchoolScapes, which was inspired by the early cinema of Lumière, noted ethnographic filmmaker David MacDougall here employs a masterful series of precisely observed scenes to explore Delwara’s local primary school and contemporary village life. Conventional documentary filmmaking practices are set aside here. There are no interviews and no narration.

However, the beautifully composed, arresting imagery, mesmerizing background sounds and conversations, and incisive, thought-provoking editing juxtapositions powerfully convey to the viewer not just the surface of Delwara’s daily life, but also its inner dimensions and rhythms, all of which unfold “under the palace wall.”

Under the Palace Wall will challenge viewers and generate thought and discussion in a wide range of courses in Indian and Asian studies, cultural anthropology, and film studies. It will certainly join the long list of classic ethnographic masterpieces produced by David MacDougall.

“David MacDougall is one of the best known ethnographic filmmakers and writers in the world. In his last book, The Corporeal Image (2006), he speaks about a new, more sensorial type of observational cinema. Under the Palace Wall exemplifies his concept. It is a sensitive depiction of everyday life in a small village of Rajasthan, India. Having the structure of a single day, this observation project introduces gestures, expressions, composite landscapes, and atmosphere, leaving the viewer with the feeling of ´being there.´ The film proposes feelings rather than interpretation, presence rather than explanation: an excellent example of the possibility of a filmic sensory ethnography.” — Program Notes, Göttingen International Ethnographic Film Festival

“This keenly observed film explores life in Delwara, a village in southern Rajasthan ruled for centuries as a principality of the former kingdom of Mewar. Delwara´s glittering palace, which looms above the village, has been converted into a luxury hotel; nestled beneath its walls sits the local primary school. Director David MacDougall uses the juxtaposition to enchanting effect, capturing a series of scenes at the school to compose an eloquent, impressionistic portrait of the life of the village, eschewing a linking narrative and recurring characters to convey something more delicate and elusive: the feeling of the place, the sense of the historical past that towers over the village, the vitality and chaos of the daily lives of the villagers.” — Program Notes, Margaret Mead Film Festival