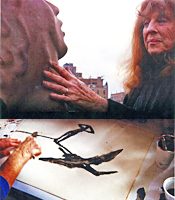 This intimate and revelatory documentary, by the noted filmmaker, photographer, and musician John Cohen, profiles the life and art of New York artist Mary Frank. In the words of Tom Huhn, Chair of Art History and Visual and Critical Studies at the School of Visual Arts in New York City, “This beautiful film is a profound demonstration of the continuity from art to life to art-making…” and “one of the most powerful and intimate portraits of an artist that we had ever seen.”

When Mary Frank began her artistic journey in the 1950s, she was known in the New York art community as a beautiful young woman and the wife of artist Robert Frank. The art world then was a much smaller place, with few opportunities for women artists. For more than 60 years she has developed a unique vision in her studio. Her work is like no other; her art never fit into the categories of Abstract Expressionist, Pop, Conceptual, New Expressionism, or Outsider Art. Rather, as the eminent art historian Linda Nochlin, of New York University writes, “Mary Frank reveals herself to be the visual poet of the inner life, evoking the pain and the mystery of our human embeddedness in the natural world.”

Through relaxed conversations and loving imagery of her work, filmmaker Cohen shows Mary Frank to be staunchly individualistic, an explorer of dreams and improvised drawings, a maker of triptychs, paintings, prints, photographs, and bodies permeated with mystery. She has made magnificent ceramic sculptures of female figures emerging from and returning to the earth, tormented, evoking mythic gods and human exigency. Her work is included in the collections of most major American museums, including the Whitney Museum and the Metropolitan Museum of Art.

The film also portrays her activism, including anti-war protests, advocacy for solar cookers in Africa, and feminist causes, as well as her notable circle of friends, especially Allen Ginsburg and Jack Kerouac, Walker Evans, Edward Steichen, and Ralph Gibson.

Visually stunning and unusually thought-provoking, Visions of Mary Frank will generate lively discussion and analysis in a wide range of classes in art history, studio art, women’s studies, and American cultural history. It was produced by John Cohen.

“Mary Frank reveals herself to be the visual poet of the inner life, evoking the pain and the mystery of our human embeddedness in the natural world. In her extraordinary skills as a creator of memorable imagery in the service of our darkest memories: death, chaos, loss, fragmentation, she confronts this darkness of the spirit and wrestles it into vivid pictorial expression” — Linda Nochlin, Lila Acheson Professor of Modern Art, New York University

“At the School of Visual Arts we regularly include in the curriculum of the studio and academic courses films about individual artists. We recently showed Visions of Mary Frank to a large audience of our students and faculty. We all found it to be one of the most powerful and intimate portraits of an artist that we had ever seen. This beautiful film is a profound demonstration of the continuity from art to life to art-making, and as such has proven to be especially valuable in the education of artists of all ages.” — Professor Tom Huhn, Chair of Art History and Visual and Critical Studies, School of Visual Arts, New York City

“Visions of Mary Frank delivers an important work on a significant artist. Its utility as an educational vehicle will be both informative and stimulating in classes and in the studio. Mary Frank is brought forward into the bright light she deserves!” — Philip Listengart, Assoc. Professor of Art & Design, SUNY Purchase

“John Cohen – filmmaker, photographer, musician, ethnographer – visits with his friend Mary Frank in her Chelsea studio, talking about her life and art. Married young (originally to Robert Frank) and pregnant at 17, she’s brutally honest about often having to put her art before all else, about the early influence of dance upon her brushstrokes, and about being (in Cohen’s words) hot in a cool world. Her paintings and sculptures, her political activism, and her past (the film includes wonderful footage of her with Allen Ginsberg and Jack Kerouac) tell the story of a deeply-felt, well-lived life.” — Karen Cooper, Film Forum Theater Program Notes