Wiping the Tears of Seven Generations 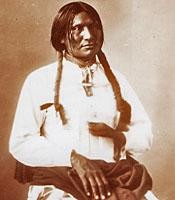 This celebrated documentary relates the story of how the Lakota Nation mourned the loss of their loved ones for 100 years — seven generations of the Lakota. They also mourned the loss of some of their people’s sacred knowledge, which died with the elders at Wounded Knee. But in 1990, inspired by dreams and visions of unity and spiritual awakening, a group of Lakota decided to bring their people out of mourning through a traditional Lakota ceremony called “Washigila,” or “Wiping The Tears.” The Bigfoot Memorial Ride was that ceremony.

The film interweaves stunningly beautiful contemporary scenes of the ride itself with archival film and photos and expert commentary to illustrate the history of the Lakota and provide an unforgettably poignant account of the events leading up to, including, and following the Wounded Knee Massacre.

The DVD version of the film includes an extra 12 minutes of footage, shot in late 2004, in which participants in the 1990 Memorial Ride discuss the profound impact of the experience on their lives.

“Wiping the Tears of Seven Generations” is a classic, thought-provoking work that explores the Lakota perspective on their history, culture, spirituality, and hope for tribal survival. The film will generate reflection, analysis, and discussion in a wide range of courses in Native American studies, American history and studies, cultural anthropology, and comparative religion.

It was produced by Gary Rhine for Kifaru Productions and directed by Fidel Moreno (Yaqui/Huichol) and Gary Rhine; the eloquent narration is delivered by Hanna Left Hand Bull Fixico (Lakota).

"More than film — it is history as it unfolds… Shows an inherent strength in tribal people not even they suspected… Generations from now people will marvel at the Bigfoot Ride and see that it was a critical pivot in the story of American Indians. Thank God we have it on film." — Vine Deloria, Jr., Prof. of Law, Religion and History, Univ. of Colorado, author of Custer Died for Your Sins and Evolution, Creationism, and Other Modern Myths

"Sensitive. Moving. The film is a model of the way art can be used to effect reconciliation and renewal." — Huston Smith, Prof. of Religion, Emeritus, Univ. of California, Berkeley, author of The World´s Religions"and Why Religion Matters

"For the first time in film, the true story of The Wounded Knee Massacre… The first of its genre to record — not rewrite — history from the Lakota perspective." — The Lakota Times

"A tour-de-force that effectively, without rancor, tells of the devastation that was visited upon not only Chief Bigfoot´s defenseless men, women, and children on the frozen South Dakota prairie in 1890, but its lingering generational impact. The Lakota narrator, with even voice, tells of the unspeakable horror of Wounded Knee. But more important than horror, the film is ultimately about the hope and rebirth of the Lakota people. This is a must for those who want to see hope triumph over the grief of seven generations." — David Claudio Iglesias, in Native Peoples Magazine

"A powerful tool in increasing understanding of our values, our way of life, and what we stand for as Indian people. This film has had a significant impact on everyone I know who has seen it, regardless of race." — Reuben Snake (Winnebago), Director, The Native American Religious Freedom Project

"A stirring record of a spiritual ceremony to end a century of mourning…. A plain statement of facts without being overtly accusatory, wielding the impact to strike a rich vein of informed guilt and inform the uninformed." — Variety